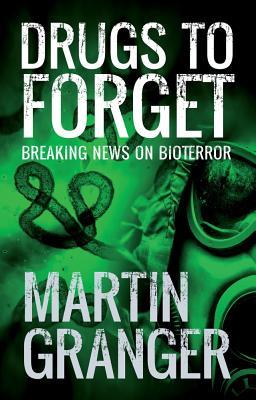 Book Review of Drugs to Forget by Martin Granger

With all the scary stuff that happens around the world, it’s easy to worry about it. It’s easy to get scared by it, and allow it to creep into your daily thoughts. Well, I wish I could help you out with that, but unfortunately, I can’t. This book may make it worse. Sorry! Honestly, it’s a little disconcerting. It’s like watching an episode of 24 play out. However, instead of Jack Bauer you have TV documentary maker Nathalie Thompson and her crew trying to piece it all together. And with that, I hope you enjoy my book review of Drugs to Forget by Martin Granger.

A FOREIGN CHEMICAL AGENT IS FOUND ON BRITISH SOIL

CAN IT BE STOPPED IN TIME IN A RACE AGAINST BIOTERROR?

When film director Nathalie Thompson is commissioned to make a programme on bioterrorism, a sudden Ebola outbreak takes her on a dangerous detour to Central Africa. Posing as a Western activist and campaigner for the rights of Africans, Nathalie must investigate the involvement of a Zimbabwean terrorist group.

But when a young colleague unearths a suspicious laboratory in eastern Java that may be producing biochemical weapons, Nathalie is immersed in a violent world of corruption and bioterrorism, which is closer to home than she thinks.

Wow. Let’s just say I like living in a very quiet, small town. I like staying at home with my kids, reviewing books, and proofreading. I even like subbing at the school once in awhile. Yep, I like my quiet, seemingly boring life. I don’t want to find myself in the middle of extremist groups or world-wide scams. Nope, I’m perfectly fine right here, thank you!

That’s not what Nathalie Thompson thinks, though. She sure is willing to insert herself right into the middle of everything! I like her as a character. She’s strong and brave, and she’s intelligent. She may put herself at risk, but it’s always for the sake of a good story. I think her character is well developed and believable. Her colleagues are also well developed. I liked how they all fit together, and think their different personalities worked together well. Each character has strengths and weaknesses, which makes them more realistic.

I found the story itself to be quite disconcerting. It’s uncomfortable to know that people can have such sinister plots. Of course I know there are people out there that think that way, but I don’t want to think about it. Dwelling on it just increases my anxiety.  The way the story was set up seemed plausible and a bit frightening. I liked the writing style and thought it did a good job of sucking me in and grabbing hold. You could say it may be a little too realistic.

I couldn’t put this book down. I liked the twists and turns and how everything fit together. And then the last line happens. What?!? I hated the ending. Well, the last line. I read it at least three times trying to see if I missed something or misinterpreted it. Nope, that’s the ending. Ugh. Not a fan. And I just don’t get it. Someone please help me out here! Why???

The copy of the book that I read was on my Kindle. I don’t know if I had an unproofed ARC, it didn’t say, but it was a bit challenging to read because there weren’t any chapter breaks. There also weren’t any breaks when it changed from one character to another. It would change from one character to another mid-line. I obviously figured it out, but having breaks would make it flow much better. It would make it much easier to read.

If you’re looking for a good summer, intense read, this book is for you! And if you read it, please let me know what you thought about the end line!

Rating: R (Profanity, including many “f” words. There isn’t any “intimacy,” but there is some violence. There are also quite a few adult themes including terrorism and bioterrorism.)