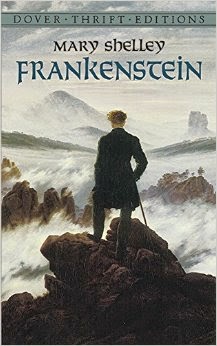 “‘I saw the pale student of unhallowed arts kneeling beside the thing he had put together. I saw the hideous phantasm of a man stretched out, and then, on the working of some powerful engine, show signs of life and stir with an uneasy, half-vital motion.’ A summer evening’s ghost stories, lonely insomnia in a moonlit Alpine room, and a runaway imagination–fired by philosophical discussions with Lord Byron and Percy Bysshe Shelley about science, galvanism, and the origins of life–conspired to produce for Mary Shelley this haunting night specter. By morning, it had become the gem of her Romantic masterpiece, FRANKENSTEIN. Written in 1816 when she was only nineteen, Mary Shelley’s novel of ‘The Modern Prometheus’ chillingly dramatized the dangerous potential of life begotten upon a laboratory table. A frightening creation myth for our own time, FRANKENSTEIN remains one of the greatest horror stories ever written and is an undisputed classic of its kind.”

I have read this book a few times, and I reread it today because I realized that I haven’t ever reviewed it, and I thought it would be perfect for Halloween. This is definitely a classic. I love the language and the rich vocabulary in this book. It does take awhile to get back into it, after reading many current novels, but I love it. Mary Shelley did a great job with this book. Although it is well known, the current trend is to call the monster Frankenstein, when in reality, it is the scientist that is named Frankenstein. The creature is never given a name, except for Fiend, Monster, and Creature. This book is morbid, if you think about it. And, even though technology may eventually be to where we could possibly create life, I hope we never do. The creature that Frankenstein creates is a very interesting character. He begins his life with hope and joy and innocence. The more humans that revile him, the more angry and fiendish he becomes. At times you feel sorry for him and at other times you are repulsed by him and his behavior. There are many human traits discussed in this book, and many of them are still with us today. This book is well written. The characters are very well developed and come to life on the page.

There are a few swear words, but they actually aren’t really used as swear words in the book. There is no “intimacy,” but there are several murders. There is also the ethics of giving life to a monster. I actually really do like this book, even though it is morbid.