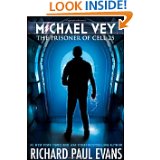 Michael Vey: The Prisoner of Cell 25 by Richard Paul Evans

(Summary taken from the back book cover) “HAVE YOU FOUND THE LAST TWO?” The voice on the phone was angry and coarse, like the sound of car tires over broken glass. “Not yet,” the well-dressed man on the other end of the phone replied. “Not yet. But we believe we’re close–and they still don’t know that we’re hunting them.” “You believe you’re close?” “They’re two children among a billion–finding them is like finding a lost chopstick in China.” “Is that what you want me to tell the board?” “Remind the board that I’ve already found fifteen of the seventeen children. I’ve put out a million-dollar bounty on the last two, we’ve got spiders crawling the Web, and we have a whole team of investigators scanning global records for their whereabouts. It’s just a matter of time before we find them.” “Time isn’t on our side,” the voice returned sharply. “Those kids are already too old. You know how difficult they are to turn at this age.” “I know better than anyone,” the man said. “But I have my ways. And if they don’t turn, there’s always Cell 25.” There was a long pause, then the voice replied darkly, “Yes. There’s always Cell 25.”

I had heard a lot about this book and so I was excited to read it, and my son wanted to read it, so I needed to pre-approve it for him. I have to say, it did not disappoint! I really liked this book. It’s engaging and definitely a page-turner. The concept is so different, which I like. Mr. Evans’ writing style draws you in and keeps on moving. I loved the characters. Mr. Evans’ character development is so good that you feel as if Michael is your best friend. Taylor and Ostin are right up there as well. I liked that some of the unfavorable characters at the beginning change to allies in the end. Characters I wanted to hit at the beginning became some of my favorites at the end. I also liked the relationships between the characters. I liked how Mr. Evans had them relate to each other and play off each other. Even though it’s unrealistic, when you are reading it, it becomes reality. I felt like I could actually someday meet someone with a power like this. Crazy, I know.

Cell 25 didn’t play as much of a role as I thought it would, but it did show the strengths of certain characters. It also showed the evil and indifference in other characters.

I loved that this book was clean! There is some violence, but no profantiy and no “physical intimacy.” The violence included high school boys’ pranks and after school fighting. It also included  fighting between good and evil at the end. Some guards die. The evil character asks good kids to do bad things. Some of them follow and some of them don’t. I loved that it showed kids that you can resist peer pressure and not do things you are uncomfortable with, or that you know are wrong.

My 10 year-old son is very excited because it is 10 yr-old approved!

Rating: PG+ (This includes the above stated violence)

Recommendation: 3rd grade and up. I think even my third grader will be okay reading it. He’s reading “Harry Potter” right now, and there is more violence and scary stuff in that than there is in this book. He may not understand the technological stuff (like what an MRI does), but I don’t know if my 10 year-old does either. I’ll have to explain that. If a third grader hasn’t read anything like “Harry Potter” or “Percy Jackson” then it may be too much.