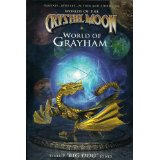 (Summary taken from the back book cover) “Fellow soul…I have been commissioned to deliver grave news. You are dead–a tragedy of a celestial war responsible for destroying the cosmos. Your soul has been without a body for more than 10,000 seasons and your spirit has been placed inside an eternal tome. This book is filled with mythical creatures and, like us, they are anxious to live again. While we wait, there are devious gods living on Ancients Sovereign. They are power hungry and seek to abolish free will. Their desire: control the new worlds created after The Great Destruction of Everything Known. With the theft of the Crystal Moon, chaos is imminent. Because of the Mischievous One’s malevolence, the worlds which are to be our new homes may not survive. Yet, there is a glimmer of hope. Three beings have been spared the devastation. They are about to begin an epic journey to save our only chance at rebirth. Their failure to reunite the pieces of the Crystal Moon will be be our sentence to an everlasting nothingness. Allow me, your spirited storyteller, to share everything I know to be fact. Welcome to chaos. Welcome to the World of Grayham.”

Wow, where to begin??  I was walking through Costco one day and I saw an author doing a book signing. I couldn’t pass that up, right? So I stopped and talked to him. It happened to be Phillip “BIG DOG” Jones. Now, first off, his name just comes across as arrogant and self-consumed, but the book looked interesting and so I had him sign a book for me. He told me that he had published the book previously as an unedited first draft in hardcover and had gotten feedback from the readers and this was now the edited version and coming out first in paperback. Great! Love paperback! Browsing through the book I really liked the full color photos of the characters and places at the beginning. It is helpful to have pictures of the characters and a correct way to pronounce their names.

This book is 592 pages long. It’s long, and it’s not an easy read like a “Harry Potter” or even an ” Eragon.” This book is heavier like a “Lord of the Rings,” and there is a lot of information to take in and keep track of, therefore it takes a long time to read. As you can tell, I haven’t posted in a long time, and that is why, I have been reading a very long book. This book is fantasy and brings in magic, romance, action, adventure, mystery, and lots of mythical creatures. It took me awhile to figure out who everyone was and why they were there, but in the end it came together. Overall I liked it. Jones’ writing is not of the same caliber as J.K. Rowling or Christopher Paolini, but it is good. Once you figure out what is going on (about the middle of the book) it gets better and the storyline picks up. I really like some of the characters and some of the character development is really good, but others not so much. There is a lot of gore and death in this book. The gruesome descriptions of how people die did not appeal to me. The character George likes to torture and kill people, and it’s not pretty. He also uses lots of “colorful” language, which I also didn’t love. He is a confusing character because he pretends to have a soft lovable side that I don’t find at all believable. I like Sam and Shalee, but Shalee speaks in a southern accent and sometimes it’s hard to figure out what she is saying. When Shalee becomes a sorceress her magic stick gives her moments of “satisfaction” when she accomplishes her goal, and I found it awkward. Luckily it stops after while. It’s also hard to get used to talking animals and a talking book, but it works alright.

Overall I did like it and I have ordered the next one. I like that the next one is already out and in paperback. That is definitely a bonus. I would recommend it with the above warnings. It is entertaining but I can’t say it’s my favorite book. I will read the next one but I’ll most like read a few other books in between.

Rating: PG-13 (There are some really gruesome deaths, and quite a bit of profanity when George speaks. There are murders and assassinations as well. There are also some “physical intimacy” scenes before marriage and after marriage.)

Recommendation: High school and up. With all the above I don’t think it’s appropriate for early teens.

I would recommend it if you’re okay with the above warnings. It is interesting and entertaining and there are some good twists that keep you reading.