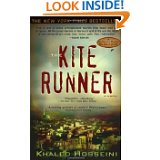 The Kite Runner by Khaled Hosseini

(Summary taken from the inside book jacket) “Raised in the same household and sharing the same wet nurse, Amir and Hassan nonetheless grow up in different worlds: Amir is the son of a prominent and wealthy man, while Hassan, the son of Amir’s father’s servant, is a Hazara, member of a shunned ethnic minority. Their intertwined lives, and their fates, reflect the eventual tragedy of the world around them.  When the Soviets invade and he and his father flee the country for a new life in California, Amir thinks that he has escaped his past. And yet he cannot leave the memory of Hassan behind him.”

This book is amazing. It’s tragic and at times traumatic, but so well written. When I finished the book I felt as if I had just read Mr. Hosseini’s diary. He grabs your attention at the very beginning and draws you into this story that pulls at your heart strings, makes you angry, makes you cry, and makes you very glad to have grown up in the United States of America. The plot has twists and turns and even though you may think you know what is going to happen, it still doesn’t happen exactly as you thought. Mr. Hosseini’s character development is right on. I felt so attached to these characters. His words just come to life on the page.

The events in the story are very difficult to read. I had to put the book down a few times and walk away because I was so traumatized. Even after putting the book down I couldn’t get the images out of my head. It was really hard, but I kept going back. I was so involved I had to finish. I don’t know how much is true about Afghanistan, like dates of invasions and if the Soviets or the Taliban did the things in the stories, but it sure makes you see world events in a different light. It puts a more personal side to events that happen around the world. I would recommend reading this book if you think you can handle the events that take place. It is so well written and there is a wonderful lesson to be learned. There are some happy moments in the book and the main character, Amir, learns a great lesson and learns to overcome his weaknesses. That is something we can all relate to and hope to achieve. I enjoyed learning more about Afghanistan and the way of life there, and some of their traditons.

Rating: R (Remember this does not follow the movie ratings. It is my way of saying this is NOT for children or young adults.) There is a rape scene and there are descriptions alluding to other sexual abuse. There is a horrible death by stoning scene. There are also war-time events that take place that are not for younger readers. There is also a lot of language.

Recommendation: College and up, in my opinion. Maybe a really mature high school senior could handle it, but I don’t think I’d go younger than that. It’s an amazing book, but very difficult to read because of the events that take place.