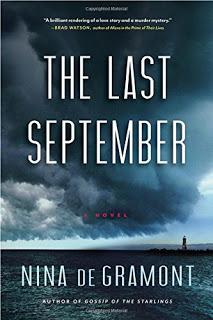 Blurb:
“Brett has been in love with Charlie ever since he took her skiing on a lovely Colorado night fourteen years ago. And now, living in a seaside cottage on Cape Cod with their young daughter, it looks as if they have settled into the life they desired. However, Brett and Charlie’s marriage has been tenuous for quite some time. When Charlie’s unstable younger brother plans to move in with them, the tension simmering under the surface of their marriage boils over. But what happened to Charlie next was unfathomable. Charlie was the golden boy so charismatic that he charmed everyone who crossed his path; who never shied away from a challenge; who saw life as one big adventure; who could always rescue his troubled brother, no matter how unpredictable the situation. So who is to blame for the tragic turn of events? And why does Brett feel responsible?”
My Review:
This book is one of the shereads.org books of fall. I was excited to read this book because the ladies at shereads usually pick great books to read. I was not disappointed! I loved the writing style of this book; I got sucked in right from the beginning. I liked how the author incorporated the life and poetry of Emily Dickinson in her story. I have always enjoyed her poetry, and I liked how it was woven into the story of Brett and Charlie. The characters were well developed, real, and interesting. There were times I liked Brett and times I didn’t. I felt the same way about Charlie and Eli too. That is what made the characters life-like, I thought, was that they weren’t perfect. They made mistakes, like we all do, and how they learned from or reacted to those mistakes told you a lot about their character. The relationship between Brett and Charlie made me crazy at first because it was so one-sided. However, I came to see how they fit together and complimented each other. I didn’t like how they treated each other at times, but no one is perfect, right? The relationship between Brett and Eli was fascinating. Eli’s character was well done. I’m not going to give it away, but he was written well, and with everything going on, it would be hard to accurately describe a character with those characteristics. I’ve never been around someone with his diagnosis, but as an uninformed reader, it seemed accurate. The transitions between the flashbacks and reality were seamlessly done, and I never got confused. You all know me, I do not read to figure out what’s going on, I just read. So I didn’t see the surprise at the end coming. It was a good and bad twist. I’d love to hear your thoughts on the twist: Did it make you feel better or worse about the situation? I enjoyed this book! I thought it had some great lessons on marriage and never letting your guard down. Marriage is something you constantly need to work on and work for–together. It’s also something you should not take for granted. You aren’t ever going to change someone, so you need to love what you have, even with idiosyncrasies and shortcomings. Forgiveness in marriage is a necessity. Life is short, so live life to the fullest each day, and love those around you with all you have because you never know what tomorrow brings. Wow. That’s a little deep, but that’s what I got out of this book. Also, mental illness is real, and those with mental illnesses need love, support, and good doctors. We’ve come a long way with mental illness in the past few years, but I think it is something that still needs more research, and a change in how we view people that struggle with it. So anyway, it’s a good book. 🙂
There is some profanity in this book. I was excited because there wasn’t a lot at all, and then when you get to about page 120ish, there are several “f” words all at once. Ugh…..I hate that. And then, that was it. Once you get through those few pages it’s fine. Weird. I hate it when authors just throw them in to throw them in. It’s irritating. There is some violence as well. There’s some domestic violence and death. Some of the scenes are graphic. There is some “intimacy,” but it doesn’t go into a lot of detail. You know it happens, but it isn’t described in detail. Overall, I enjoyed this book and would recommend it with the above warnings.
Rating: R (This book is not appropriate for younger readers. Profanity, including a few “f” words; violence, including domestic violence and death; “intimacy” scenes and innuendos. They aren’t too graphic or descriptive, but you know it happens.)
Recommendation: Adult
Disclosure: I did receive a free copy of this book in exchange for my honest review.