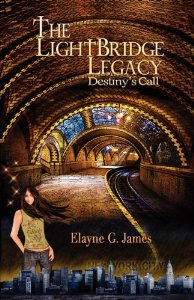 (Summary taken from an email the publisher sent me) ” [Destiny’s Call] is book one in a YA series that chronicles the adventures of an
American girl who learns just before her twelfth birthday that she has been
chosen by a race of ancients in Peru to inherit the most powerful magical
object in the world. Her move from the Mojave Desert to NYC in book one,
parallels her inner journey from sheltered little girl to self-assured young
woman, and her growing magical abilities intermittently aid her and get her in
trouble. The
underlining themes of overcoming fear and embracing who you really are, will
resonate with anyone who has had to overcome adversity while trying to find
their place in the world.”

I really enjoyed this book. It took me by surprise and hooked me from the beginning. I liked Ms. James’ writing style. I thought it flowed well, was easy to read and understand, and had just enough mystery to keep me reading. It was  a little confusing, at times, because some of the characters have unusual names, and there are some fantastical words introduced. It took me awhile to get the hang of some of it, but once I did, I read it quickly. It is fantasy, which I like, and there are some different worlds that brush paths. Not alien-like. I don’t do aliens, usually, but this is different than that. I liked the characters a lot. I especially liked Ani and Kahete. I liked the parents at the beginning, but didn’t like the dad at all towards the end of the book. I’m still not sure what I think of CJ. Sometimes I liked her and sometimes I didn’t. I felt bad for her and her circumstances, but didn’t approve of a lot of what she did. I found Kahete intriguing and wished there had been more about him.  Sophia also intrigued me. I wanted to know more about her, and her magic, as well. I liked the story and thought the lesson of finding yourself in a big world was very pertinent to today. I didn’t like the decision that Ani made without her father’s permission. I hope that doesn’t give any young adults reason to make similar decisions. I worried about it when I read it, but then when I started to think of other books I have enjoyed where younger characters make similar decisions, I felt better about it. Still, when my children read this we will definitely chat about not making that choice.

This book is fairly clean. There is some language, some stealing, and a domestic violence scene. A man attacks a 13 year-old girl. It is violent, but it is not a rape, and the girl gets out okay. She is injured, but heals fine. There are also a few sketchy choices made by Ani and CJ: disobedience, lying, that kind of thing.

The ending of this book definitely leaves you hanging. I am excited to read book #2, and I would recommend this book, with the previous warnings.

Rating: PG-13 (some language, stealing, a domestic violence scene, and some sketchy choices)

Recommendation: 13 years and up. I think a 13 year-old will be able to handle everything that happens. I would recommend that parents read it first to make sure it is appropriate for their child. Each child is different.