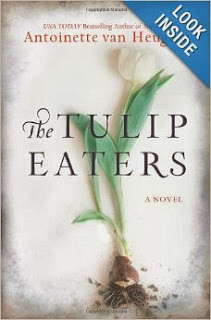 The Tulip Eaters by Antoinette van Heugten
(Summary taken from the inside book cover) “It’s the stuff of nightmares: Nora de Jong returns home from work one ordinary day to find her mother has been murdered. Her infant daughter is missing. And the only clue is the body of an unknown man on the living-room floor, clutching a Luger in his cold, dead hand. Frantic to find Rose, Nora puts aside her grief and frustration with the local police to start her own search. But the contents of a locked metal box she finds in her parents’ attic leave her with as many questions as answers–and suggest the killer was not a stranger. Saving her daughter means delving deeper into her family’s darkest history, leading Nora half a world away to Amsterdam, where her own unsettled past and memories of painful heartbreak rush back to haunt her. As Nora feverishly pieces together the truth from an old family diary, she’s drawn back to a city under Nazi occupation, where her mother’s alliances may have long ago sealed her own–and Rose’s–fate.”
I’m not going to lie. The first few chapters in this book are gruesome and gory. I almost couldn’t handle it. I almost stopped reading. Fortunately, I kept reading. I had to. As a mom I had to know what had happened to Rose and if Nora was able to find her. This is seriously a nightmare scenario. It is every mom’s worst fear come true. And every daughter’s as well, because that is not what any of us want for our mothers. So on I read and read and read. I couldn’t put it down. Some of the characters are well done and compelling, and some of them are over-the-top and not realistic (Amarisa). Nora’s reactions seem to be a little extreme, although since I’ve never been in her position I can’t judge. I know I would go crazy. Seriously. I don’t think I could sit around and wait. I’m not sure I would go as far as she did, either, though, because I’m too much of a rule follower. Having a missing child may change that though. Momma Bear would most likely come out in ways I wouldn’t expect. I felt bad for Nora too. Learning that your life and parents were nothing that you thought they were would be extremely difficult. I really liked Nora’s friend Marijke. She was a voice of calm and reason, and supported Nora through all of the craziness. I also liked Richards, although he is only in about half of the book. The Rosen family creeped me out. All of them. Okay, all of them except for Henny. I do not understand their thinking or reasoning, and definitely did not like their justification for doing what they did. I’m not one to hold a grudge for over 30 years, so I had a hard time understanding their mentality. I was especially disappointed with Leah. Their actions were a bit much.
I liked the pacing of the story and thought it was captivating. I don’t know any Dutch, so when the characters started speaking in Dutch I just had to guess. It would have been nice to have a translation on some of it. I enjoyed learning the history of the Dutch during World War II. It wasn’t a happy one, but was anything during that time period happy? I liked the title, but I thought the story would be more about the people living during that time; more about the actual people who had to eat the tulips. It wasn’t, so I’m not quite sure why it is titled that way. There is a lot of language in this book. There are a lot of “f'” words and lots of others as well. There is an attempted rape, murder, attempted murder, assault, kidnapping, and lots of action. But don’t worry, there is also a little romance. I really did enjoy this book. It may have a lot of coincidences and be a little unrealistic, but, like I said, I couldn’t put it down until I knew that Nora had Rose safe in her hands. Did that happen even at the end? Oh, you’ll have to read it to find out! Once you start, hang on and be prepared for a wild ride!
Rating: R (This does not follow the moving ratings exactly, it is just my way of saying that it is not appropriate for younger readers.) A gruesome murder, murder, attempted murder, assault, kidnapping, attempted rape, and a lot of language, especially the “f” word.
Recommendation: Adult
Disclosure: I did receive a free copy of this book in exchange for an honest review.