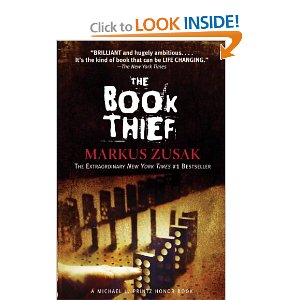 The Book Thief by Markus Zusak

(Summary taken from the book jacket) “Narrated by Death, Markus Zusak’s groundbreaking new novel is the story of Liesel Meminger, a young foster girl living outside of Munich in Nazi Germany. Liesel scratches out a meager existence for herself by stealing when she discovers something she can’t resist–books. Soon she is stealing books from Nazi book-burnings, the mayor’s wife’s library, wherever they are to be found. With the help of her accordion-playing foster father, Liesel learns to read and shares her stolen books with her neighbors during bombing raids, as well as with the Jewish man hidden in her basement.”

This book took me awhile to get into because it is so different, but it is very well crafted and the language is beautiful. It is very descriptive, and strangely, that is what threw me at first. There were images that didn’t make sense to me, but then I just decided to read on and enjoy the imagery. I LOVE books, so I related to Liesel, although I don’t think I’d steal them. I loved the characters in this book, and they are developed so well. I think my favorite character was Liesel’s foster father. I picture him as so gentle and loving and patient. I also picture him as fun and happy. He’s also a hard worker and very compassionate. Liesel’s foster mother is definitely rough around the edges, but I think she is also a very loving woman, she just shows it in a different way. Rudy. Rudy is Liesel’s best friend and what a character he is! I love the scene where he runs like Jesse Owens. I felt so bad for Max. What a terrible time in our world history. Yet, how wonderful that there were still people with common sense and courage to help the Jews. I loved that Liesel loved him so much. I cried when I read the book he wrote for Liesel.

The story in this book just drew me in. What an amazing story of survival, hope, despair, courage, and love. Like I said, the imagery is beautiful, and yet a little confusing at times. This is not a happy book. It’s World War II in Nazi Germany. There are Jews paraded down the street, there are many deaths, and war violence. There is a suicide hanging. The children steal. A lot. There are bombing raids and bomb shelters. However, there is also enough hope and love and courage and survival that it’s not too depressing. I was left with hope that challenges can be overcome and difficult situations can be worked through. I was also filled with hope because there are still good people in the world. I really liked this book and recommend this book with the previous warnings.

Recommendation: 16 and up. This may be too early for some kids, so I recommend that parents read it first to make sure it is appropriate for their child.

1 thought on “The Book Thief”