The Forgotten Carols
by
Michael McLean

I have heard about The Forgotten Carols by Michael McLean, but I have never actually seen
the production. I have a friend that goes every year as a family tradition; she loves it. This is what she says about it: 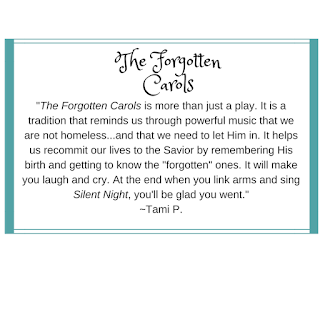 I will be going this year, so I’m very excited! In the meantime, I have been asked to spread the
word about this year’s production.
Description:

The Forgotten Carols stage performance tells the story of Connie Lou, a nurse whose empty life is changed when Uncle John, a new patient she is attending, recounts the story of Christ’s birth as told by little known characters in the nativity story. The accounts from the Innkeeper, the Shepherd and others help the nurse discover what the world has forgotten about Christmas, ultimately encouraging her to open her heart to the joy of this special season. 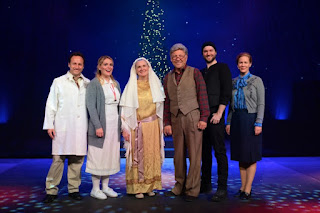 “THE FORGOTTEN CAROLS has been a gift I first received back in 1991 when the book and accompanying music was written and released to the public.  As with all good gifts, particularly one like The Forgotten Carols, comes a desire to share it with others…with the hope that they will “receive” the gift as I did;  Feeling the message and the love of the season in the context of the story and songs.  When I first started “performing” the story I thought it was my gift to the audience, but then I discovered that the more I tried to give it away the more it came back to me…a hundred fold.  Being able to bring the story to life with a team of talented people that truly have become “family” is another part of the gift that has profoundly blessed my life.  But WHAT MOST SURPRISES ME is how the presentation of this story with songs has grown, evolved and taught me things in the language that resonates so deeply with me.  Story & Song.   A couple of days ago, quite out of the blue, A NEW SONG, maybe we could call it a New Carol, just arrived.  I sat at the piano and it just poured out of me.  It really touched me because it captures what I think Uncle John would want most for Connie Lou (and the entire world, for that matter).  Just this morning I envisioned how this new carol could be presented during this year’s TOUR and I got goosebumps.  I can’t wait to share this gift I just received.  So, if you ask what The Forgotten Carols means to me, it means RECEIVING then SHARING then DISCOVERING the meaning of the gift, and then RECEIVING MORE, then SHARING MORE and then DISCOVERING more.”

Tickets
(Utah, Idaho, Arizona, Washington, Texas, and New Mexico)
http://www.forgottencarols.com/shows/
Disclosure: I was offered two free tickets to this event if I spotlighted it.