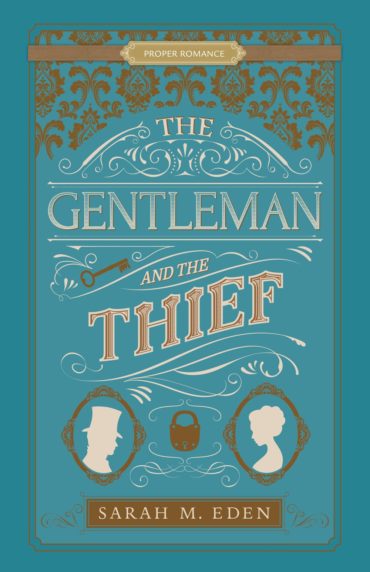 Book Review of The Gentleman and the Thief by Sarah M. Eden

The first book in this series, The Lady and the Highwayman, was one of my favorite books by Sarah M. Eden. I loved the writing and the uniqueness of the story. Needless to say, I was very excited when I heard she had a second book coming out. So, what did I think? Well, let’s just say that The Gentleman and the Thief by Sarah M. Eden did not disappoint! This book could be counted as a stand-alone book, but it is a spin-off with characters from The Lady and the Highwayman. I think that The Gentleman and the Thief will be better understood if you read the other book first.

“A gentleman scribes penny dreadful novels by night and falls in love with a woman who is a music teacher by day—and a thief at night.

From the moment Hollis Darby meets Ana Newport, he’s smitten. Even though he’s from a wealthy, established family and she isn’t, he wishes he could have a life with her by his side. But Hollis has a secret: the deep coffers that have kept his family afloat for generations are bare, so he supports himself by writing penny dreadfuls under a pseudonym. If not for the income from his novels, he would be broke.

Ana Newport also has a secret. Though she once had a place in society thanks to her father’s successful business, bankruptcy and scandal reduced his fortune to nothing more than a crumbling town house. So Ana teaches music during the day, and at night she assumes the identity of the “Phantom Fox.” She breaks into the homes of the wealthy to reclaim trinkets and treasures she feels were unjustly stolen from her family when they were struggling.

When Hollis’s brother needs to hire a music tutor for his daughter, Hollis recommends Ana, giving him a chance to spend time with her. Ana needs the income and is eager for the opportunity to get to know the enigmatic gentleman. What neither of them expects is how difficult it will be to keep their respective secrets from each other.

When a spree of robberies rocks the city, Ana and Hollis join forces to solve the crimes, discovering that working together deepens the affection between them. After all, who better to save the day than a gentleman and a thief?”

I seriously love this series. The characters are just so fun. I thought I loved Fletcher and Elizabeth from the last book, but Hollis and Ana are just as great! Sarah M. Eden does such a great job developing and writing her characters. They are well developed, unique, and each has a distinct voice. One thing I liked about Hollis and Ana was that they each have a second, secret life. They each have their reasons for their hidden activities, but I think it allowed them to be more accepting of each other.

I can’t write a review of this book without discussing the Dread Penny Society. The whole idea of it is so great. I love how they carry pennies as an acknowledgement of each other, and I love how they make it a priority to save the children living on the streets. What a noble cause! They don’t just do that, though! The Dread Penny Society also gets involved in crime rings and such, mostly because they are related to the kids as well. I love the idea of a secret society to do good!

This story delves into some of the things that high society deems inappropriate: gambling, stealing, and child slaves, especially the gambling. The stealing part is kind of brushed off a bit (you’ll need to read it to see why), but it goes quite into depth about gambling. The Dread Penny Society gets involved in the case! There are some very tense moments where danger is high, but it makes for quite the page turner.

I really enjoyed The Gentleman and the Thief! Sarah M. Eden just knows how to draw the reader into her world. The descriptions are well done and they make you feel as if you’re there. Judging by the ending, I don’t think she’s finished with spin-offs from this group, and I am so happy about that! I hope there are more books coming! By the way, I LOVE the cover art on this book!

Content Rating: PG+ (There isn’t any profanity in this book, but she does say things like, “He cursed under his breath.” I don’t love it when authors do that, but it is WAY better than actual profanity. There aren’t an “intimacy” scenes, but there is some kissing. This book does have some minor violence.)