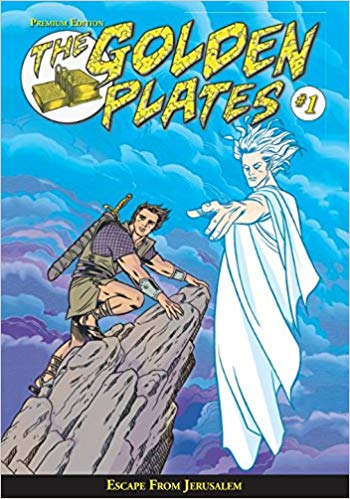 Book Review of The Golden Plates #1 Escape From Jerusalem

I am a member of the Church of Jesus Christ of Latter-day Saints. We are sometimes known as Mormons. The reason for the nickname is that we believe The Book of Mormon to be a companion scripture to the Bible. We believe The Book of Mormon to be the word of God, and we believe that it is another testament of Jesus Christ. I’m not generally a comic book fan, but I had heard about the comic book adapted from The Book of Mormon, and I have to say that I was curious. When I was approached to write a book review of The Golden Plates #1 Escape From Jerusalem I agreed out of curiosity. What did I think? Keep reading to find out!

The Golden Plates is an illustrated adaptation of the fifth best selling book of all time, The Book of Mormon: Another Testament of Jesus Christ, which has sold over 120 million copies. This graphic novel/comic book adaptation was first created in 2005 by award winning artist Michael Allred. The Premium Edition has replaced the full text originally included in the first edition with simplified and edited text, making the story easier for younger readers to follow and also showcasing more of the stunning artwork. It has also been converted to digital form for enjoyment on phones, tablets, and desktop devices through Amazon, iTunes, and Kobo. New printed editions have also been released through Amazon.

​The first 6 issues cover the first 145 pages (27%) of the Book of Mormon, from 1st Nephi through the Words of Mormon. This adaptation is a fun and enthralling to way to help older children and teens understand and enjoy the Book of Mormon in a format more advanced than simplified children’s stories or scripture readers meant for young children.

So what did I think? Well, my first impressions were definitely skeptical. As I said, I’m not a huge comic book fan. They’ve never interested me, so I wasn’t sure what to expect. At first glance, the cover art includes a picture of an angel, and I think the angel’s a little creepy looking. I think it’s consistent with the comic book art, but it is a little disconcerting. Other than that, the art is very well done. It’s well drawn and colored. I think it does a good job depicting the characters—except the angel, as I stated previously. I also liked the use of all the different colors.

The story is taken from scripture, and I know it quite well. For those who may not know the story, it’s laid out well and is easy to follow. Instead of quoting The Book of Mormon verbatim, it tells the story. It’s accurate in its depiction and adaptation. There is some made-up dialogue, but it follows what I think the people would say in those circumstances. There are different color text boxes or comment bubbles to help the reader figure out who is talking. This is just a small piece of the whole story; there are more comic books in the series to continue the story.

Overall, I was impressed. I worried beforehand that having scripture in comic book form would feel sacrilegious or not serious enough. We already have picture books for the small children that tell the story, and I think this fulfills that same purpose for the older children and YA. It is not intended to replace actual scripture study, but to help the older children and YA learn and connect with the story. They will then have an easier time reading and understanding The Book of Mormon later on.

Although you may miss out on many of the scriptural lessons and knowledge, reading The Golden Plates comic book will help you learn the story. For those older children who struggle to understand scriptural wording and language, I think this will help them a lot. I think I would just make sure to differentiate between fictional comics and this one, which tells a true story.

It’s really good, but it just has a lot of extra details. The picture of Adam and Eve made me a little uncomfortable, and the angel is a little creepy. I already knew the story really well so it didn’t really help me understand it better. Toward the end when Laman and Lemuel are fighting with Nephi, I got confused with who was who.

The characters were all kind of creepy. Also I got confused on who was who. But it has good shading and color. I also liked the use of texture. Another thing I liked was the map on page five.

(FYI: These are not my kiddos. However, I WANT this book shelf! Isn’t it amazing??)

Content Rating: PG (There isn’t any profanity or “intimacy.” There’s some minor violence.)

My Rating: 4/5 (For the adaptation and the artwork.)

Click HERE to find out more about The Golden Plates.