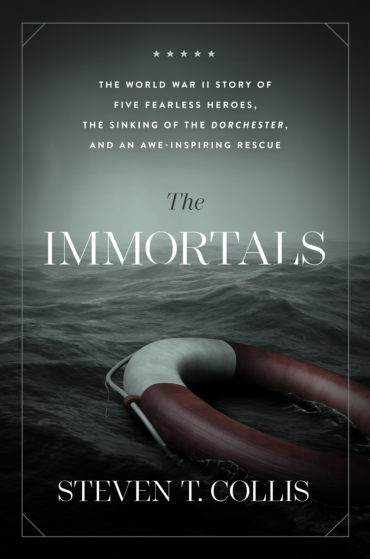 Book Review of The Immortals by Steven T. Collis

The Merriam-Webster dictionary app on my phone (yes, I’m a nerd) defines hero as “a person admired for achievements and noble qualities; one who shows great courage.” In today’s world it’s easy to find people to admire like sports stars or movie stars. As great as they might be at their jobs, they are not heroes in my book. A true hero would be someone who would show great courage in the face of danger. Heroes sacrifice themselves in order to help others. Police officers, military members, and fire fighters are a few examples of people I see as heroes. In The Immortals, Steven T. Collis describes the lives and actions of five heroes. These heroes sacrificed their lives helping others to live. It’s an amazing story and I’m excited to share it with you.

“During World War II, four chaplains were assigned to the SS Dorchester with more than 900 men on board. Alexander Goode, a Jewish rabbi; John Washington, a Catholic priest; George Fox, a Methodist minister; and Clark Poling, a Baptist minister, all offered comfort, reassurances, and prayers along with a warning from the captain that a German submarine was hunting their convoy.

Thoroughly researched and told in an engrossing nonfiction narrative, this true story alternates between accounts told from the perspective of the Nazi U-boat captain and his crew (as found in their journals and later interviews) and survivors from the Dorchester who credit the four chaplains with saving their lives after their ship was torpedoed.

The celebrated story of the men who became known as the Immortal Chaplains is now joined for the first time in print by the largely untold story of another hero: Charles Walter David Jr. A young Black petty officer aboard a coast guard cutter traveling with the Dorchester, Charles bravely dived into the glacial water over and over again, even with hypothermia setting in, to try to rescue those the chaplains had inspired to never give up.

Page-turning and inspiring, The Immortals explores the power of both faith and sacrifice and powerfully narrates the lives of five heroic men who believed in something greater than themselves, giving their all for people of vastly different beliefs and backgrounds.”

Honestly, I had never thought about chaplains and their service in the military until I read this book. The WWII Medical Research Centre defines the need for chaplains:

“The religious and spiritual welfare of the members of a command is an important factor in the development of individual pride, morale, and self-respect, essential in a military organization.”

Chaplains were chosen by their own religious organizations, but each was trained to love and serve all military members, regardless of their religious affiliation. They did things like give counsel, perform weddings and funerals, serve, and perform their religious services.

This story discusses four chaplains: Alexander Goode, John Washington, George Fox, and Clark Poling. The book also discusses Charles Walter David Jr., who also became a hero that night. The actions these men took during the sinking of The Dorchester saved the lives of many of their shipmates. Each of them paid the ultimate price that night, and I am so thankful to Mr. Collis for bringing their story to light.

The book is very well written. It’s nonfiction, but it reads like a fictional story. Mr. Collis’ writing brings these men, their families, and their stories to life. By the end of the book you feel like you are a part of their families. I liked the format of the book. It is written from the points of view of the Nazi U-boat captain and the U.S. military members on The Dorchester and the other ships traveling with it. Having the two points of view gives the story a greater depth. It is easy to hate the U-boat captain, but I guess you have to think that he was doing his duty. War is complicated and dangerous.

Even though it was difficult to read about the events of that night, it gave me hope for humanity. There are good people out there! I felt for the families of these men, who never got to welcome their soldiers home. The book definitely makes you realize the price that is paid for freedom. Men and women around the world gave their lives to bring peace to a war-torn world. I was not born during this period of time, but I hope I will be able to honor their sacrifices by learning about them, honoring their memories, and defending freedom to the best of my ability.

Content Rating: PG-13 (There isn’t any profanity or “intimacy” in this book. It is, however, quite violent at the end. The ship sinks, killing many–some quite graphically. It is war.)