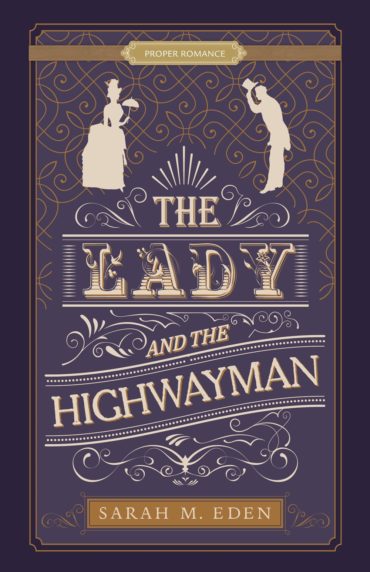 Book Review of The Lady and the Highwayman by Sarah M. Eden

I love it when a book takes you somewhere you’ve never been, and never knew you wanted to! You don’t know what you don’t know, right? I had never heard of Penny Dreadfuls until I read this book. In case you don’t know what they are (because I didn’t), they were sensationalized stories printed on cheap paper in the United Kingdom in the nineteenth century. The story would be sold in parts, with each part costing one penny. These stories were quite popular with the young men of the time. When I say sensationalized, I mean that they were more fantastical, involving characters like ghosts and vampires. Who knew, right? Now you know! These Penny Dreadfuls play a major part in The Lady and the Highwayman by Sarah M. Eden.

“Elizabeth Black is the headmistress of a girls’ school and a well-respected author of ‘silver-fork’ novels. But by night, she writes the Penny Dreadfuls that are all the rage among the working-class men under the pseudonym, Charles King.

Fletcher Walker began life as a street urchin, but is now the most successful author in the Penny Dreadful market, that is until Charles King. Determined to find the elusive Mr. King, Fletcher approaches Miss Black. Elizabeth agrees to help if only to insure her secret identity is never discovered.

What neither author anticipated was the instant attraction. It’s upper-class against working-class, author against author, where readers, reputations, and romance are all on the line.

This book is so fun! I didn’t know anything about Penny Dreadfuls when I began reading, and now I feel like an expert. I completely got sucked into the story, the life, and the time period. The characters, especially, draw you into their lives. Each character is well written, developed, and so unique. Fletcher—oh Fletcher. He just might make you swoon if you’re not careful! And I love Elizabeth’s complexity. Her secret life makes you want to, well…find a cool secret life! Nothing too crazy. Does book blogging count as a secret life when you’re a sixth grade teacher? Probably not. It’s not cool enough. I’ll need to think about it for awhile.

The uniqueness of the story draws you in. All the members of the “Dread Penny Society,” and their cause, remind me a lot of today’s Tim Ballard and Operation Underground Railroad. It’s hard to think of a better cause to support! I loved watching their operations take place, and knowing the lives they saved. The only thing that was a bit off for me was that I kept wanting to read “Dead Poets Society” instead of “Dread Penny Society.” The former is one of my all-time favorite movies. That’s just me, though.

I thoroughly enjoyed this book! The characters come to life on the pages, and they draw you into their lives and stories. There’s a lot of wit, which I love. I like the relationship between Elizabeth and Fletcher, and I like how the “Penny Dreadfuls” stories play into the plot. There are also some great causes highlighted like education and help for the poor and needy. Of course I love the tension and the romance as well!