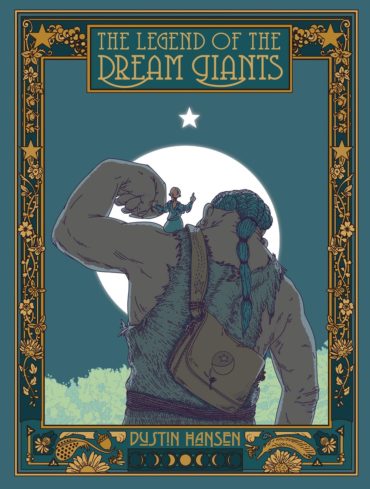 An orphaned giant named Berg is hoping to find just one person he can call friend.

For many years, Berg has lived alone; the only reminders of his family are his mother’s satchel and his recurring dreams of a white bear who shares a magical sand from a fallen star.

Sometimes, when Berg feels lonely, he will risk entering a village to trade a smooth river rock or a feather for food. He’s really searching for kindness and companionship; but with every attempt he makes, people chase him away, thinking he is Ünhold—a giant and a monster.

In his travels, Berg comes upon a city made of iron, where he meets a little girl, Anya. To his amazement and delight, Anya knows about the magical dream-sand, too, and says she wants to be his friend.

The mayor also befriends Berg and enlists him to guard the city from the dangerous Ünhold. But Anya suspects the mayor has other plans for the young giant. Fearing the city isn’t safe, she warns Berg to flee. Confused and torn between his two friends, the young giant has to figure out where he can place his trust.

This tender and unique story-within-a-story is a riveting tale of loss, longing, adventure, being yourself, and finding the true meaning of friendship.

Berg is a giant. Sadly, he is all alone. His mother was killed when he was little, leaving him to learn and grow and survive on his own. He’s a nice giant. Yes, he takes things from the village, but he always tries to leave a fun little treasure in return. Even though Berg is kind, most of the people in the villages are afraid of him because they have heard the stories of Ünhold, and Ünhold is not kind.

Berg is an interesting character. He is easy to relate to in the beginning because he tries to be kind. As he gets sucked into the village life—which is what he thinks he wants—he becomes harder to relate to because as a reader you know what is coming. I wanted to scream at him to listen to his little friend. He has a good heart, though, and just wants to be loved and not be alone.

Anya is a sweet little girl. She is brave and very smart. She was my favorite character in this book. As a character she is well written and realistic. She also wants a friend. Anya has a lot more “street smarts” than Berg does, and she understands more of what is going on. I felt for her as she tried to warn her giant friend.

This book was fine. It is VERY reminiscent of The BFG by Road Dahl. Even the covers of the two books I have look similar. The stories are different, but they have many similarities. There are bits and pieces of happiness in this book, but I found much of it to be sad. Maybe it’s my age and experience, but I found this book to be depressing. There were also parts that I found to be very confusing.

There are some good lessons to be found in this story like friendship, trust, kindness, and finding out the truth of situations before we make assumptions.

Content Rating: PG (There’s no profanity or “intimacy.” There is, however, some violence, and a main character dies.)

Recommendation: Middle-Graders (4th-6th) and up