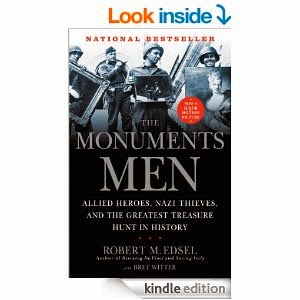 The Monuments Men by Robert M. Edsel
(Summary taken from amazon.com) “At the same time Adolf Hitler was attempting to take over the western world, his armies were methodically seeking and hoarding the finest art treasures in Europe. The Fuehrer had begun cataloguing the art he planned to collect as well as the art he would destroy: “degenerate” works he despised. In a race against time, behind enemy lines, often unarmed, a special force of American and British museum directors, curators, art historians, and others, called the Momuments Men, risked their lives scouring Europe to prevent the destruction of thousands of years of culture. Focusing on the eleven-month period between D-Day and V-E Day, this fascinating account follows six Monuments Men and their impossible mission to save the world’s great art from the Nazis.”

After I saw the new movie titled “The Monuments Men,” I learned that it was based on a book. You know me, I’d usually rather read the book than watch the movie. I liked the movie a lot, and couldn’t wait to get my hands on the book. And then I got my hands on the book. This may be the ONLY time you ever hear me say this, but (it hurts to even say it…..) I liked the movie more than I liked the book. Ouch! I can’t believe those words just came out, but it’s true. I can see why they made the changes in the movie that they did; it made the story so much more exciting and interesting. Don’t get me wrong, the story to be told is very interesting, and I wanted to learn about it, and there’s a lot of good information in the book. The characters in the book, these Monuments Men and women who helped, are great people and are great characters. They each have their own qualifications and stories. Also, in the artwork that they saved are many famous and well-loved pieces that I have heard about. The problem for me in this book was too much information. There were so many different people that I had a difficult time remembering who was who. Many of the names are German or French and I had a hard time keeping track of these unfamiliar names. Also (and this is probably my fault), I hadn’t heard of most of the works of art discussed in the book, so they didn’t mean anything to me. The first 200 pages were very slow going; it’s not a fast read, at all. I was hoping it would be written a little better. I didn’t think it flowed very well, and you add to that all the different people and places, and it became confusing and kind of boring. It wasn’t until I hit page 200 that I finally started getting used to the names and places, and the story picked up a little. It took me about three weeks to read this book, and I’m used to reading one to two books a week. So I was getting a little irritated, and it is now a week late at the library because it took me so long to read it. If you’re interested in the history of the story, it’s worth reading. Just know that it’s different from the movie, and in a more drawn-out and confusing way. Of course, it’s more true to what actually happened than the movie is, but it just didn’t have the same feeling for me. If you’re a history buff or enjoy learning about WWII, then I think it’s still worth reading, just be prepared for a long read.

Rating: PG-13+ (Language, WWII atrocities-it doesn’t go into a ton of detail on these, but they are mentioned)

Recommendation: High School and up