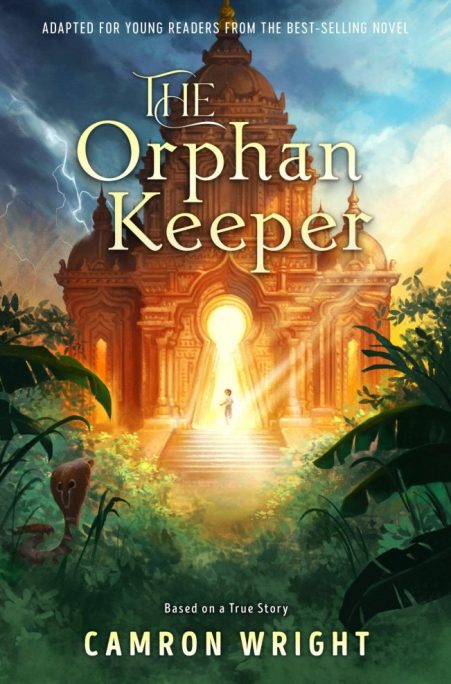 I have not read the original The Orphan Keeper by Camron Wright, so when I first heard about this book, I did not realize it was a version adapted for middle-graders. Now I think I need to read the original! I’m not sure what changed or how the story was adapted for younger readers, but I can tell you that it is an amazing story! The Orphan Keeper (Middle-Graders Version) by Camron Wright would make a great middle-grader Christmas present or addition to any home library!

Seven-year-old Chellamuthu’s life—and his destiny—is forever changed when he is kidnapped from his village in Southern India and sold to the Lincoln Home for Homeless Children. His family is desperate to find him, and Chellamuthu anxiously tells the Indian orphanage he is not an orphan, that he has a mother who love him. But he is told not to worry as he will soon be adopted by a loving family in America.

Chellamuthu is suddenly surrounded by a foreign land and a foreign language. He can’t tell people that he already has a family and becomes consumed by a single, impossible question: How do I get home? But after more than a decade, home becomes a much more complicated idea as the Indian boy eventually sheds his past and receives a new name: Taj Khyber Rowland.

It isn’t until Taj meets an Indian family who helps him rediscover his culture and family history that he begins to discover the truth he has all but forgotten. Taj is determined to return to India and begin the quest to find his birth family. But is it too late? Is it possible that his birth mother is still looking for him? And which family does he belong to now?

The Orphan Keeper is a deeply moving and gripping journey about discovering one’s self and the unbreakable family bonds that connect us forever.

As a mother, this story pulled at my heartstrings on so many levels! Chellamuthu was only eight years old when he found himself pulled into a van, kidnapped, and being driven hours away from home. He’s taken to an orphanage where he desperately tries to tell everyone he doesn’t belong—he has a mother and a family!! No one listens. In fact, the orphanage adopts him out to live with a family in the United States. It isn’t until much later in his life that he begins to question what has happened to him and starts his journey to find his long-lost family.

What an amazing story! Mr. Wright’s masterful storytelling skills shine throughout this book. He weaves an amazing tale that sucks you in at the very beginning and keeps you turning pages until the end. The writing style is engaging and easy to read and understand. The descriptions of Chellamuthu’s hometown, the orphanage, and England make you feel as if you are right there with him.

The characters make this story! Chellamuthu may be a bit of a troublemaker, but he comes across as such a relatable kid. He wants to fit in and have friends. His efforts at the orphanage to help the other children melted my heart. The older, college-age Taj isn’t quite as endearing. He’s a little harder to relate to because he comes across as bitter, angry, and apathetic. Then, when you get to the older Taj, he kind of finds himself and you just want to help him in his quest.

Fred and Linda Rowland seem like such nice people. I wish there had been a little bit more about them during the skipped years, but the story isn’t really about them. The character development of the people running the orphanage brings them to life, and not in a good way. I hate those people with a passion. Then there’s Christopher Raj. He seems like an amazing man, and he is kind of an untold hero in this story.

This book is based on a true story. It happened. It’s crazy and sounds like a Hollywood movie, but it makes it even better that it’s true. Everything that had to happen in order for it to all come together seems a bit unbelievable, but yet, so amazing that it did. This story may seem depressing at first, but I love how much hope and love and friendship and family shine through also.

Once again, this is the middle-grader version of The Orphan Keeper. My daughter is 14, so she is YA, but I told her she needs to read this when she finishes her current book. It’s so good. I think the middle-graders can learn a lot from this book! There are some great lessons, and it’s always good to learn about different people and different ways of living.

Content Rating: PG+ (There isn’t any profanity or “intimacy.” There’s not any violence, but there are some heavier themes and difficult situations.)

Age Recommendation: Middle-Graders (4th-6th) and up