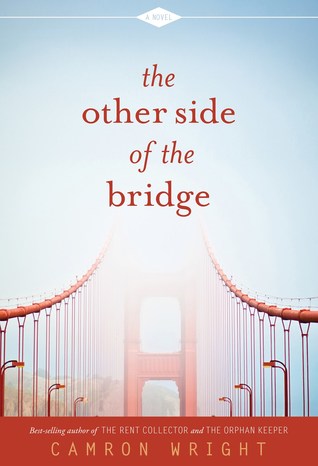 Have you ever lost someone? I’ve lost my grandparents and, more recently, my father-in-law. It’s tough! Each person grieves in his or her own way. What helps one person may not help the other person at all. And the timing is different for everyone. The Other Side of the Bridge by Camron Wright delves into the difficult world of loss and suicide. Two very different characters handle the loss in their lives in their own ways, but they have one thing in common: the bridge.

“Katie Connelly has lived in San Francisco all her life. Her late father made his career on the Golden Gate Bridge, and the many stories of how he saved jumpers still haunt her. And now her job assignment is to write about the history of the bridge—a history that includes a secret journal about a promise ring and a love story that may be the answer to her unresolved sorrow.

Meanwhile, Dave Riley, a marketing executive in New York, has sorrows of his own. Grasping at straws after tragedy strikes his family, he decides to follow a daydream that has turned into an obsession: to drive across the Golden Gate Bridge on a motorcycle on the Fourth of July.

Does the bridge somehow mysteriously hold the answers both Katie and Dave are looking for? Or will they find something completely different when they get to the other side?”

I loved Camron Wright’s The Rent Collector. Therefore, when I had the chance to review his new book, The Other Side of the Bridge, I couldn’t resist! The story switches between Katie Connelly and Dave Riley. I thought that the character development was pretty good, overall. Katie lives in San Francisco and recently lost her father. She works at the university doing research. Dave lives outside of Manhattan. He works in marketing at a big company in New York. He is dealing with a tragic loss.

The writing switches between the two characters. I didn’t find it difficult to switch. Katie’s story is written in italics to help distinguish between the two of them. I also thought their voices were different enough. Of the two, Katie definitely stood out to me as more relatable and amiable. Dave isn’t quite as likable, and although his story is tragic, it is also harder to relate to. Katie’s grieving feels more “normal,” if you can say that, where Dave definitely takes it to the extreme.

Don’t get me wrong, I felt empathy for Dave, I really did. However, his extreme reaction compared to his feelings at the beginning of the book made it seem like a discord to me. Who am I to say though? I’ve never experienced what he did. The event that happened at the end, after he technically reached his destination (I’m trying to not give anything away here…), was a bit much for me. It felt over the top and out of place, in my opinion.

One of my favorite things in the book was learning about the Golden Gate Bridge, how it was built, and the people that built it. Patrick O’Riley’s story is so good, and I enjoyed reading through his journal with Katie. I loved learning about the Claddagh faith rings.

Aren’t they so pretty? According to http://www.celtic-weddingrings.com:

The Claddagh ring meaning is all about love, loyalty, and friendship. The two hands represent friendship, a heart symbolizes love and the crown on top is for loyalty. The ring can be worn on different fingers or hands, depending on status.

Patrick’s words from the book describe his love for Anna:

With this crown, I give my loyalty. With these hands, I promise to serve. With this heart, I give you mine.

I think they are beautiful, and I love the meaning that they have. That part of the story was my favorite.

At first I felt that the book would be very predictable. Some of it was, but not in the way I originally thought. What I originally predicted was way off course, thankfully. However, I felt disappointed by the moment at which the characters cross paths. I had hoped for a little more, but I guess it fit for each of them. The ending felt a bit rushed, but I liked it.

The book as a whole felt a bit depressing, but it talks a lot about overcoming loss in your life. It also delves into suicide. Both of these topics need to be discussed, so why not allow people to learn through a good story? We all grieve differently, and there’s no right or wrong way to experience grief. I did like the lessons it taught about overcoming, moving on, and learning to live again—guilt free.

Overall, I liked The Other Side of the Bridge by Camron Wright.  Unfortunately, I didn’t like it as much as I liked The Rent Collector, but it’s a good, thought provoking read.

Rating: PG-13 (There’s no profanity and no “intimacy,” except for a brief kiss. I rated it higher because of the discussions about suicide.)

Age Recommendation: 14 years-old and up

(This post contains affiliate links. You don’t pay any extra and I receive a small commission.)