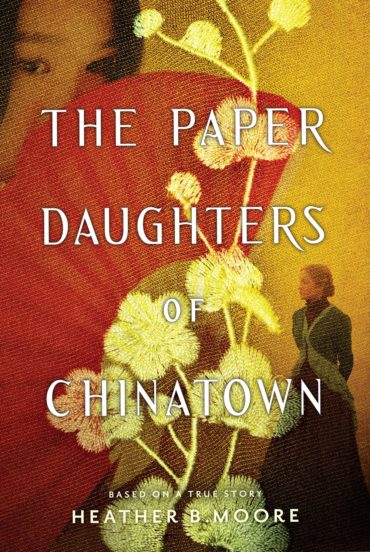 Book Review of The Paper Daughters of Chinatown by Heather B. Moore

Before I began reading this book, I had never heard of Paper Daughters. I don’t know if many have heard of these women. Allow me to explain. In the late 19th century and early 20th centuries, men from China immigrated to the United States to try and find jobs. Many of these men ended up in California working either in gold mines or on the railroads. Housing conditions were either rough or very expensive, and so many of the women stayed in China to take care of families. There were also other things like heavy taxes and anti-immigration laws that made it difficult or impossible for Chinese women to immigrate to the United States.

In 1882, Congress enacted the Chinese Exclusion at of 1882. This law banned Chinese laborers from immigrating for 10 years. This law was renewed every 10 years until 1943. However, to help better relations with the Chinese, there were some exceptions to this law. They included students, Chinese officials, teachers, travelers, and merchants. This loophole allowed Chinese people, including women, to come to the United States.

With many men in their communities, and very few women, men were not able to “be intimate,” if you know what I mean. This situation set up a deplorable new trade in the United States: selling Chinese women as prostitutes. Human slavery. These disgusting people would find poor families in China and tell their families that there was a wealthy man in the U.S. that wanted to marry their daughter, and that he would give her a good life. These women would come to the U.S. with hopes and dreams of a good life, only to find depravity and degradation. They would find themselves addicted to opium and enslaved as a prostitute.

How did they use the loophole to get these women here? Well, they would tell the officials that these women were daughters of men already here. So, on paper, they were daughters. Hence the name paper daughters. Honestly, I cannot believe that situations like this went on then, and it blows my mind that it can still be going on today. It turns my stomach and makes me ill.

Thankfully, today we have amazing groups like Operation Underground Railroad to help. In the late 19th century and early 20th century, they had Donaldina Cameron and the women of the Occidental Mission Home. I wish I had learned of Donaldina Cameron a long time ago. She’s a true American hero.

“Based on true events, The Paper Daughters of Chinatown in a powerful story about a largely unknown chapter in history and the women who emerged as heroes.

In the late nineteenth century, San Francisco is a booming city with a dark side, one in which a powerful underground organization—the criminal tong—buys and sells young Chinese women into prostitution and slavery. These “paper daughters,” so called because fake documents gain them entry to America but leave them without legal identity, generally have no recourse. But the Occidental Mission Home for Girls is one bright spot of hope and help.

Told in alternating chapters, this rich narrative follows the stories of young Donaldina Cameron who works in the mission home, and Mei Lien, a “paper daughter” who thinks she is coming to America for an arranged marriage but instead is sold into a life of shame and despair.

Donaldina, a real-life pioneering advocate for social justice, bravely stands up to corrupt officials and violent gangs, helping to win freedom for thousands of Chinese women. Mei Lien endures heartbreak and betrayal in her search for hope, belonging, and love. Their stories merge in this gripping account of the courage and determination that helped shape a new course of women’s history in America.”

And now we come to our story: The Paper Daughters of Chinatown by Heather B. Moore. The book is based on the life and experiences of Donaldina Cameron. Many of the people and situations in the book are based on real people and events. However, it is fiction. Ms. Moore did an excellent job of telling this story.

Donaldina Cameron arrived at the Occidental Mission Home in 1895 to teach sewing classes to the women and children that lived there. She quickly found out that it was a difficult job because so many of the resident women and children had suffered greatly. Each woman or child had a story. None of them were happy stories.

As a new teacher there, Donaldina was asked to go on a rescue mission. Three women from the home (including and interpreter) would go with a couple of police officers to rescue women from the brothels and gambling houses. Usually, the enslaved women would contact the home through a messenger. The messenger would know the address and would give the women in the home some sort of token, like a ribbon, to help them identify the victim. Going out like that scared her, but she went. This began Donaldina’s story. She never looked back.

The book continues to tell Donaldina’s story. Her life was spent rescuing these paper daughters and loving those that lived in the home. It didn’t matter what happened in the world around them: earthquakes, fires, corruption in high places, etc., Donaldina found a way to keep these women safe. Her nickname amongst the Chinese mob was Fahn Quai, which means White Devil. The slave owners would tell their slaves to be afraid of her so when she came to rescue them the girls would be afraid and wouldn’t want to go with Donaldina.

Not only does the story focus on Donaldina Cameron, it also tells the stories of some of the paper daughters Donaldina helped rescue. Their stories are unbelievably sad and heartbreaking. Some of the women flourished and went on to get married and have families. Many of the women continued to help at the home even after they had moved on. Unfortunately, there were a few that couldn’t handle the loss of opium or couldn’t learn to move on. I truly loved getting to know these women through their stories. What unbreakable spirits they had.

Even though this is a difficult story to read because of the unimaginable things these women survived, and even though it is tough to think about as part of my country’s history, this is such a good read. I knew that many men from China helped to build the railroad, but I didn’t realize that their families could not come with them. I had no idea this occurred in our history. Donaldina Cameron is a true American hero, and I am so glad I had the privilege of learning her story in this book. I hope that I can be more like Donaldina. Child trafficking still exists in our world today, and I hope that I can play a small part in rescuing these victims as Donaldina did.

Rating: R (There’s no profanity in this book. This book does have prostitution, drugs, violence against the women, and trafficking. It’s as tastefully done as I think it could be, and none of it is overly detailed or graphic, but it is there. The themes in this book are very much for adults and not for younger readers. It is based off of true people and events. )