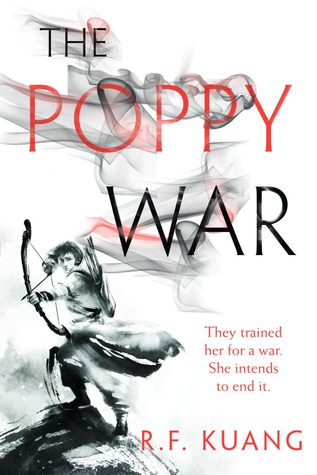 Book Review of The Poppy War by R.F. Kuang

I had heard a lot about this book from other book bloggers, so I put it on hold at the library. It took awhile, but I was finally able to pick up the book. This book had such high ratings from everyone, so I was excited to read it. What did I think? Did it live up to the hype? Check out my book review of The Poppy War by R.F. Kuang to find out.

“When Rin aced the Keju—the Empire-wide test to find the most talented youth to study at the academies—it was a shock to everyone: to the test officials, who couldn’t believe a war orphan from Rooster Province could pass without cheating; to Rin’s guardians, who always thought they’d be able to marry Rin off to further their criminal enterprise; and to Rin herself, who realized she was now finally free of the servitude and despair that had made up her daily existence. That she got into Sinegard—the most elite military school in the Nikara Empire—was even more surprising.

Being a dark-skinned peasant girl from the south is not an easy thing at Sinegard. Rin is targeted from the outset by rival classmates because of her color, poverty, and gender. Driven to desperation, she discovers she possesses a lethal, unearthly power—an aptitude for the nearly mythical art of shamanism. Exploring the depths of her gift with the help of a seemingly insane teacher and psychoactive substances, Rin learns that gods long thought dead are very much alive—and that mastering control over her powers could mean more than just surviving school.

For even though the Nikara Empire is at peace, the Federation of Mugen still lurks across a narrow sea. The militarily advanced Federation occupied the Nikara Empire for decades after the First Poppy War, and only barely lost the continent in the Second. And while most of the people in the Empire would rather forget their painful history, a few are aware that a Third Poppy War is just a spark away.

Rin’s shamanic powers may be the only way to save her people. But as she finds out more about the god who has chosen her, the vengeful Phoenix, she fears that winning the war may cost her her humanity.

And it may already be too late.”

So, what did I think? Well, honestly, I have very mixed emotions. I kept reading. I kept turning pages, so that means something. The writing style is engaging and it sucks you into the story. I thought the character development was really good. The characters come to life on the page, and that always makes a book better because you’re invested in the characters. At the beginning, especially, I found myself routing for Rin. I understood why she wanted to do well on the test.

I’m not sure why I didn’t put this book down. It was intriguing, but more in a watching-a-train-wreck sort of way. There were many things in the content that I just didn’t like; I especially didn’t think they were appropriate for teens to be reading. While Rin was studying she would harm herself; she said the pain helped her. As a mom, I definitely don’t want my daughters or sons reading that and thinking it’s ok to self-harm. No, no, no, no.

I got that it was a military training facility, and so I understood the fighting and practicing, but what I didn’t like was the use of opioids (hence, The Poppy War). We have enough trouble right now with people being addicted to opioids; I don’t think our teens need to see fictional characters using them to find gods. I just didn’t like that whole premise, and it’s a huge part of the story.

When I read Mockingjay by Suzanne Collins, I finished and felt sick to my stomach. I just felt yucky. That is also how I felt when I finished this book. It’s not happy or inspirational–it’s dark and disturbing. I was intrigued, but it didn’t live up to the hype. I especially don’t think it’s appropriate for YA. This book definitely wasn’t for me. However, if those things don’t bother you then you’ll probably enjoy it.

Rating: R (Profanity, including dozens of “f” words. There isn’t an “intimacy.” Violence including war atrocities, rapes, murder, bombings, fighting, and the death of many characters.)