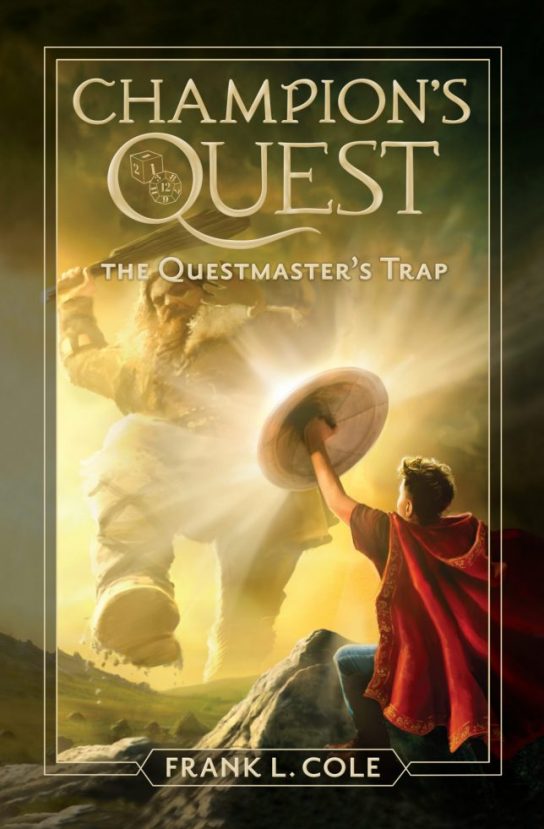 Middle-grader fantasy series are the best! Most middle-graders enjoy fantasy, and all the action makes for a fun read! Many middle-graders want to be the hero of their own stories, they want to go on adventures, and they want to fight monsters. Done and done in this book! Champion’s Quest: The Questmaster’s Trap (Book #2) by Frank L. Cole adds some fun twists from book #1 that I think readers will enjoy! It’s a fun series that takes the reader on a wild ride!

Hello, Brave Reader: You’re just in time to roll the Die of Destiny and play a game of Champion’s quest. The wizard Questmaster Hob has summoned the Wild Crows on a new adventure. But not everything is what it seems.

A new, sinister Questmaster creates chaos for Lucas, Miles, and Jasmine. They are ill-prepared to fight stronger, challenging monsters, including an evil centaur who has taken a magical ally hostage. As the Wild Crows journey to rescue her, they encounter shadow elves, troltusses, and giants. They also learn new skills and strategies, and discover their quest is more than just a game this time. The fate of the world of Champion’s Quest—including the lives of the wizards Hob and Bogie—hangs in the balance.

Can the Wild Crows prevail? Will the luck of the dice be in their favor? Can they gather the right magical items and overcome their weaknesses? It will take true champions and a bit of luck to win this gripping, fantastical, high-stakes adventure.

Book #1 in this series, The Die of Destiny, sets the reader up for a fun ride. It introduces the characters and gives the reader the lay of the land and a taste of some of the trials the gamers face. The Questmaster’s Trap (Book #2) continues the adventure! This time, The Wild Crows find themselves starting their quest in less-than-optimal circumstances. They don’t even have time to get full instructions or to get to know all their teammates before they’re thrust into their quest. It’s a bit of a shock, to say the least.

As they embark on their quest, they find that things are a little different this time around. Who can they trust? Do they have any allies? And why are the monsters so much harder to defeat than they were in their last quest? Will they be able to pull it together in time to succeed?

This book, although similar to the first book, has some fun twists and turns that add a whole lot of mystery, intrigue, and suspense. The characters are well developed and seem authentic. They each have their own strengths and weaknesses, which end up being important to the story line. Each character needs to overcome some big hurdles—some of these hurdles require help from others and some of them require individual effort. There are some epic failures and a few amazing wins. I like how the characters learn from each other and each situation.

I like how mental health is also addressed in these books. One of the main characters, Lucas, suffers from panic attacks. He calls them the “creepers.” Although he may have a panic attack at a very inopportune moment, the other characters accept, love, and support him through it. He talks himself through them and is able to control them sometimes. This shows growth, acceptance, and a normalization of mental health struggles. We need more of this today!

The Questmaster’s Trap has a fun writing style and is well written. Middle-graders and early YA will enjoy this book as a fun addition to the series!

Content Rating: PG (There isn’t any profanity or “intimacy.” There is some violence as they fight monsters.)

Age Recommendation: Middle-graders and up