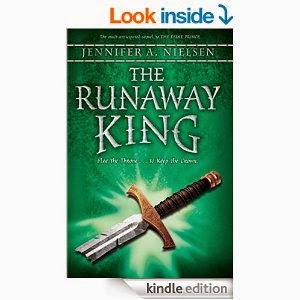 The Runaway King (Book #2 of The Ascendance Trilogy) by Jennifer A. Nielsen
Blurb:
“Just weeks after Jaron has taken the throne, an assassination attempt forces him into a deadly situation. Rumors of a coming war are winding their way between the castle walls, and Jaron feels the pressure quietly mounting within Carthya. Soon, it becomes clear that deserting his kingdom may be his only way of saving it. But the further Jaron is forced to run from his identity, the more he wonders if it is possible to go too far. Will he ever be able to return home again? Or will he have to sacrifice his own life in order to save his kingdom? The stunning second installment of “The Ascendance Trilogy” takes readers on a roller-coaster ride of treason and murder, thrills and peril, as they journey with the Runaway King.”

Wow! This book is quite the roller-coaster ride! It is action-packed from the first page until the last. There is always something going on in this book! There is never a dull moment. There are a few surprises too. Jaron is totally crazy. Seriously. For a second book in a series this one does not disappoint. I didn’t like it as much as the first one, but it is still good and definitely worth reading. You learn a lot more about about a few of the characters, and you get to meet a few new ones as well. Let’s just say that they are a rowdy bunch; I would not want to hang out with them! I think you do see how Jaron grows as a character in this book. I think it takes awhile, but towards the end of the book you begin to see him maturing, and that is a good thing. I like Ms. Nielsen’s writing style; it’s easy to read and just sucks you right into Carthya and Jaron’s life. The characters are well developed, and fun. The ending though……total cliffhanger!!! Ahhhh!!! Must. get. third. book!!!

There isn’t any profanity or “intimacy” (Thank you!!!). There is some violence: sword fighting and theft mostly. If you liked the first book then you definitely need to read the second one!

Rating: PG+ (No profanity or “intimacy,” but there is some violence. There are a bunch of sword fighting scenes, a couple characters die, and there are a few scenes with theft in them.)

Recommendation: 4th grade and up. This is a great middle-grader book, and I think both girls and boys will like it. It would make a great read-aloud as well.