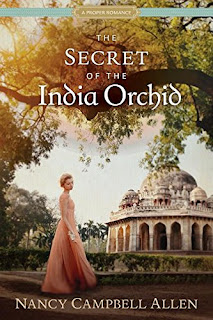 *This post contains affiliate links. Click here for more information.
The Secret of the India Orchid
by
Nancy Campbell Allen

Blurb:
“Anthony Blake, the Earl of Wilshire, is in love with his best friend’s sister, Sophia Elliot. But his plans to court her are put on hold when he is forced to resume his role as an undercover shy for the Crown. A secret document listing the names of the entire network of British spies–including his own–has been stolen. To protect Sophia, Anthony cuts off all ties to her and exchanges his life as an honorable earl for the facade of a flirtatious playboy. Heartbroken and confused, Sophia travels to India, hoping to find healing in one of the most distant regions of the British Empire. But the exotic land isn’t as restful as she had hoped. Instead, she finds herself embroiled in a mystery of a missing sea captain, a possible murder, and a plot that could involve the prince of India. And when Anthony appears at the British Residency, asking questions and keeping his distance from her, she is stunned. She still loves him, and, in her heart, she knows he loves her too. But how can she rebuild her relationship with him if he won’t confide in her? Does she dare offer her heart to him a second time, or will their love be lost under the India sun?”
My Review:

Wow! Although this is a proper romance, it could very well fit into the mystery section as well! This proper romance isn’t all flowers and love notes; it has it’s fair share of romance, for sure, but it’s so much more! There’s murder, betrayal, kidnapping, and lots of secret keeping. Sophia is a strong female character. She holds her own against the men who sometimes desire her to look pretty and do nothing else. I liked her spunk, independence, and compassion. Anthony is also a good, strong character. He may have a soft side underneath all that military/spy persona, and it kinda peaks out every once in awhile. Predictability aside, I enjoyed this book. It has everything you want in a proper romance: a few stolen kisses, a little bit of cheese, some great “Awwwww”s, and a mystery to boot! What could be better?? It’s definitely the most edgy proper romance I’ve read (more violent-not more racy), and I have to say that I thoroughly enjoyed it. I liked the mystery, the secrets, the search for the culprit, and that it took the book past just cheesy romance, and elevated it. I recommend this book.

Rating: PG-13 (There isn’t any “intimacy,” except for a few brief kisses, and there isn’t any profanity-to my recollection. There is a murder, but you don’t read about it as it happens, you find out after it has occurred. There are a couple of scenes where characters die, some in kind of graphic ways.)

Recommendation: YA (13+) and Adult

Enter to win a free copy of this book!!!
a Rafflecopter giveaway