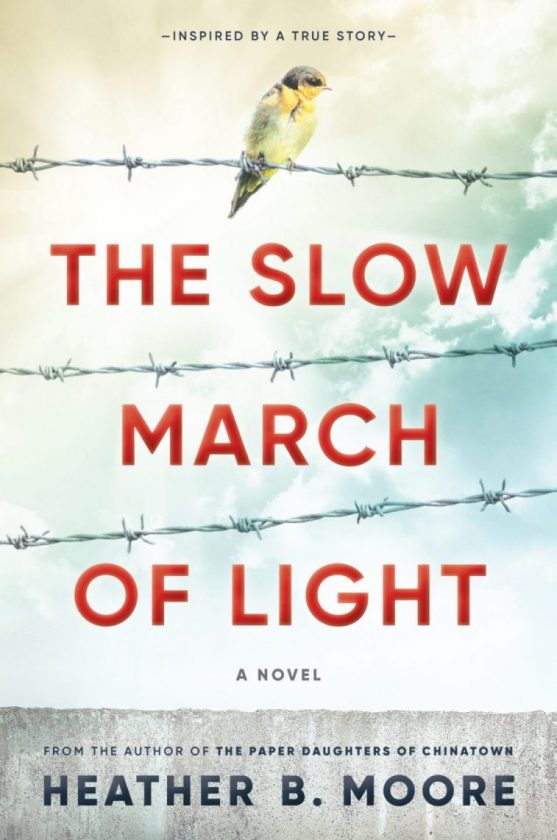 Book Review of The Slow March of Light by Heather B. Moore

If you’re a long-time follower, you’ll know how much I enjoy reading nonfiction and historical fiction. I’ve read a lot of books on WWII. Some of them are my most favorite books. I have also read a lot about the Revolutionary War and a bit about the Civil War. There might only be one book on my blog about the Cold War. A Night Divided by Jennifer Nielsen is the only Cold War book I can remember reading. I think it’s time to add another, what do you think? Enter The Slow March of Light by Heather B. Moore. Wow! What a story!

Sometimes all you have is hope.

In the summer of 1961, a wall of barbed wire goes up quickly in the dead of night, officially dividing Berlin. Aware of the many whose families have been divided, Luisa joins a secret spy network, risking her life to help East Germans escape across the Berlin Wall and into the West.

Bob Inama, a soldier in the US Army, is stationed in West Germany. He’s glad to be fluent in German, especially after meeting Luisa Voigt at a church social. As they spend time together, they form a close connection. But when Bob receives classified orders to leave for undercover work immediately, he doesn’t get the chance to say goodbye.

With a fake identity, Bob’s special assignment is to be a spy embedded in East Germany, identifying possible targets for the US military. But Soviet and East German spies, the secret police, and Stasi informants are everywhere, and the danger of being caught and sent to a brutal East German prison lurks on every corner.

Best-selling author Heather B. Moore masterfully alternates the stories of Bob and Luisa, capturing the human drama unique to Cold War Germany was well as the courage and the resilience of the human spirit.

I remember when the Berlin Wall finally came down. I watched it on tv. My parents told me to take a picture of the moment in my mind because it was such a momentous event. Thankfully, I listened. I’m thankful to have that memory now. This book isn’t about the coming down of the wall, though. This book is about the wall appearing overnight and the people that were imprisoned behind it. The story follows the experiences of Bob Inama, who was an American soldier stationed in Frankfurt. Although it’s not a biography, this book includes many of the experiences he had.

The book also follows a woman named Luisa Voigt. Her character is based off of a woman that Bob met in Germany. She lived with her father in Frankfurt, but when her father’s job transferred him to West Berlin, they lost touch. I liked her story a lot. The second half of her story is complete fiction, but it’s based on experiences of other German citizens.

The Slow March of Light is so well written. I loved the format with the two different stories. It was difficult to decide which one I liked the best because I liked both of them so much. The characters are developed well, the story flows well, and I liked the writing style. The descriptions in the book make you feel like you are there. You can tell that Heather B. Moore put a lot of time and effort into her research.

You know how some titles just don’t make sense? Sometimes you’ll read a whole book and still not quite understand the title. That is not this book. It’s very clear where the title is in the story and how it fits into the narrative. The cover art also fits the story well.

What an inspiration Bob Inama is! I am grateful to have learned about him and his story. I highly recommend this book!

Content Rating: PG-13+ (There isn’t any profanity or “intimacy” in this book. There is some violence: beatings, people dying in graphic ways. Sometimes you don’t read all the details, you just know it happened.)