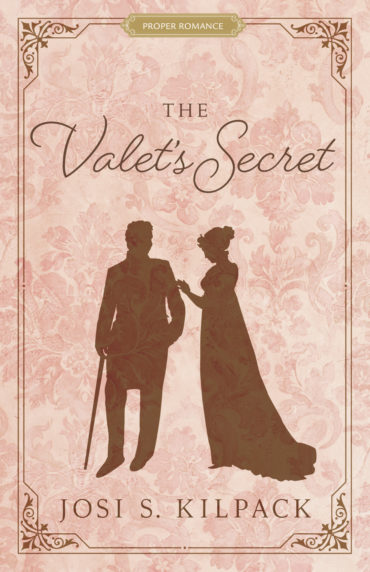 Book Review of The Valet's Secret by Josi S. Kilpack

Would you trust someone who lied to you the first time you met him or her? It would be very difficult, I think. Relationships are built on trust, and it would be challenging to give your heart to someone that you can’t trust. That’s just the scenario Rebecca finds herself in in The Valet’s Secret by Josi S. Kilpack. Can trust be restored? Will her feelings of love overcome her feelings of mistrust? You’ll need to read this book to find out! Keep reading to check out my review.

As a once happily married woman, Rebecca Parker had a good life, but now widowed, working for a living, and her only child grown, she feels invisible, tired, and lonely. That is until the day a valet speeding by on a horse nearly runs her off the road. Mr. Malcolm Henry is apologetic, gentle, and handsome. She’s instantly drawn to him, which is why, rather than stopping him from kissing her, she kisses him back, reigniting a nearly forgotten passion. But love at first sight only happens in fairy tales—never to an ordinary woman like her.

She sees Mr. Henry again and feels the possibilities growing until, while working in the kitchens during a dinner party, she sees the valet she kissed sitting at the right hand of the baroness. Mr. Henry is not the earl’s valet; he is the heir to the earldom—Kenneth Winterton.

Heartbroken, angry, and betrayed, Rebecca does not trust Lord Winterton and refuses to accept his apology. But when Lord Winterton proves he is as kind and gentle as “Mr. Henry” was, she finds herself willing to give him a second chance. But will he take a chance on her? He needs a wife to help him in his place in society, and nothing about Rebeccas life does that . . . except how he feels when she is with him.

Trust, love, loneliness, and passion collide in this story about a man who will risk it all to fight for the woman he loves and a woman who does not believe in fairy tales—until she finds herself living in one.

What a fun story! A passionate kiss with a stranger always gets the reader’s attention! Both Rebecca and Kenneth are great characters. Kenneth may get himself into trouble by misrepresenting himself on their first meeting, but he sure spends the rest of the book trying to make up for it. I love Rebecca’s independence and strength. I love Kenneth’s determination and consistency. Both characters are well written, have their own voice, and have their own flaws. I like it when characters have flaws because they seem so much more realistic.

The characters have such a great relationship with each other. It’s fun to watch them grow and develop together. I enjoyed watching them learn forgiveness and humility over the course of the book.

The Valet’s Secret is well written. Ms. Kilpack has a knack for drawing the reader into her little storyland and keeping her there. Her writing has a good flow and great descriptions and dialogue. The setting is perfect for the story. I like the unique story line. There are some great lessons taught in this book, as well: the importance of trust, forgiveness, and second chances are just a few.

I enjoyed this book. It has everything you want in a romance, including that passionate kiss with a stranger—you can’t go wrong with that!