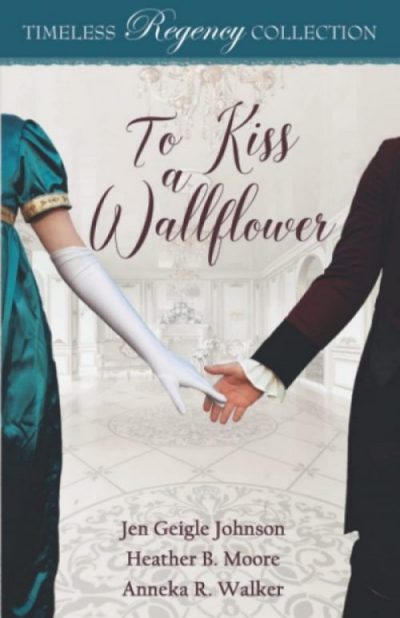 Book Review of To Kiss a Wallflower by Jen Geigle Johnson, Heather B. Moore, and Anneka R. Walker

To Kiss a Wallflower by Jen Geigle Johnson, Heather B. Moore, and Anneka R. Walker is the first Timeless Regency Collection book I have read. I have to say that I’m impressed! The cover art is not my favorite, but the three short stories inside definitely make up for it. Yes, you read that correctly! Three short stories that make up one book. It’s so fun!

Lottie Hughes likes people, as long as they aren’t too close. Does it bother her that no one asks her to dance? Yes, but she’s not sure how to drum up dance partners when she has almost no dowry, no title, and freezes up when anyone tries to talk to her. When she suddenly inherits a huge amount and is the new center of attention all over London, her secret dreams might come true but also her worst nightmares. Suddenly everyone wants to talk to her. Men ask her to dance. And she is inundated with interested suitors. She fights to stay close to the few friends she knows are true. One man saw her before her life changed forever. But does she want to accept his help when he, too, might be insincere?

“Letters to a Wallflower,” by Heather B. Moore

Ellen might be beautiful and considered a diamond of the first water by Society, but she is so very tired of the pressure to marry a titled gentleman so that her beauty won’t go to waste. When her cousin Dinah dares Ellen to attend a ball with no frills and to stand with the wallflowers, Ellen takes on the dare. What’s in the wager for her? The prize cuttings of her aunt’s extraordinary roses. But what Ellen isn’t expecting is Lord Ravenshire to engage her in the most interesting conversation. When she confesses to him of her opposition in marrying for a title, he confesses his distaste of the London scene. They strike a bargain together, one which will either push them apart or lead to a future sweeter than either of them could have imagined.

“To Marry a Wallflower,” by Anneka R. Walker

Charlotte Winters is destined to spinsterhood until she turns down an unwanted proposal and everything changes. With gossip rampant, her father attempts to salvage her reputation by betrothing her to another. Soon she is sent off to her aunt’s to meet Lord Templeton, her intended. Anxiety-ridden, Charlotte begs her aunt to let her observe Lord Templeton from afar before their introduction. She never planned to pretend to be her fictional cousin to learn more about him, or to fall in love with Lord Templeton’s friend in the process. Lord Templeton dreads returning to the empty halls of Newcliff Manor. When his father’s old friend, Mr. Winters reaches out for assistance, Lord Templeton finds himself returning home engaged to a woman he has never met. Desperate to learn more about Miss Winters, he befriends her cousin. He wouldn’t have spoken to her, or lied about his identity, if he’d known the quiet woman would sneak into his heart.

This fun collection of short stories takes the theme of “wallflowers,” or the not-so-popular women of the ton who stand against the wall and basically hide during the balls. These are the shy girls who may be afraid to put themselves out there. Honestly, I don’t blame them! Each story is completely different and unrelated, except that each story includes a wallflower as the main character in the story.

Before I began reading, I was afraid that the different stories would not fit together or that the contrast between writers would be confusing. I did not need to worry! Yes, all three stories are completely different and written by different authors, but I seamlessly jumped from one to the next.

The writing in each of these stories is great. I liked how each of them were so unique. They may have all included a wallflower, but each wallflower had her own voice, situation, strengths, weaknesses, and happily ever after. Each of the main men in these stories were also unique. They also came from different backgrounds, had their own set of circumstances, and courted in individual ways.

I truly enjoyed this book and would definitely recommend it! This book makes for an entertaining summer (or any time of year) read!

Content Rating: PG (Clean! There’s no profanity, violence, or “intimacy,” except for some brief kissing.)

1 thought on “To Kiss a Wallflower by Johnson, Moore, & Walker”