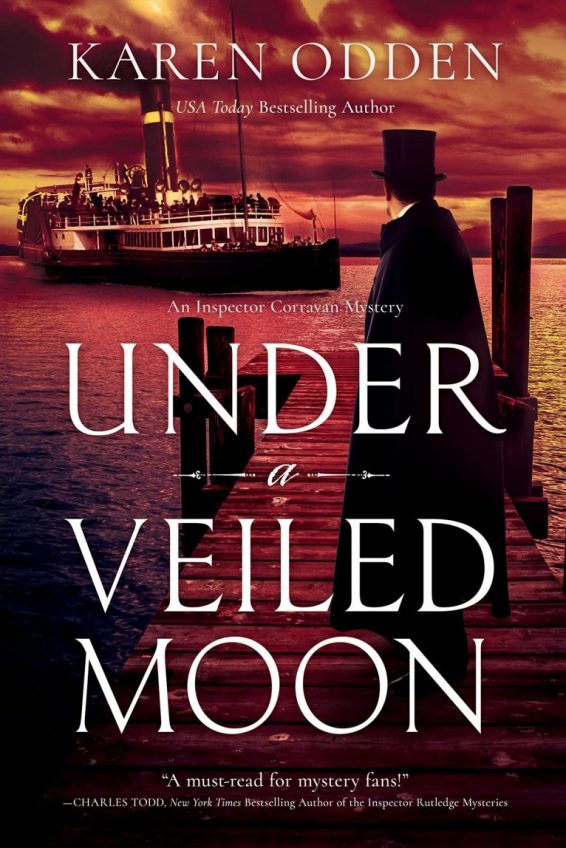 Book Review of Under a Veiled Moon by Karen Odden

Wow! I haven’t read a murder mystery in a long time, and here is the second one is as many weeks! Look at me! It has been a fun couple of weeks! Under a Veiled Moon by Karen Odden takes you back to England in the late nineteenth century. Division and mistrust between the English and the Irish was high, and violence was beginning to rise. Amid this, several accidents occurred, killing many. What, if anything, does it have to do with rival gangs and ethnicities? Detective Corravan investigates and feels determined to put an end to the violence.

In the tradition of C. S. Harris and Anne Perry, a fatal disaster on the Thames and a roiling political conflict set the stage for Karen Odden’s second Inspector Corravan historical mystery.

September 1878. One night, as the pleasure boat the Princess Alice makes her daily trip up the Thames, she collides with the Bywell Castle, a huge iron-hulled collier. The Princess Alice shears apart, throwing all 600 passengers into the river; only 130 survive. It is the worst maritime disaster London has ever seen, and early clues point to sabotage by the Irish Republican Brotherhood, who believe violence is the path to restoring Irish Home Rule.

For Scotland Yard Inspector Michael Corravan, born in Ireland and adopted by the Irish Doyle family, the case presents a challenge. Accused by the Home Office of willfully disregarding the obvious conclusion and berated by his Irish friends for bowing to prejudice, Corravan doggedly pursues the truth, knowing that if the Princess Alice disaster is pinned on the IRB, hopes for Home Rule could be dashed forever.

Corrovan’s dilemma is compounded by Colin, the youngest Doyle, who has joined James McCabe’s Irish gang. As violence in Whitechapel rises, Corravan strikes a deal with McCabe to get Colin out of harm’s way. But unbeknownst to Corravan, Colin bears longstanding resentments against his adopted brother and scorns his help.

As the newspapers link the IRB to further accidents, London threatens to devolve into terror and chaos. With the help of his young colleague, the loyal Mr. Stiles, and his friend Belinda Gale, Corravan uncovers the harrowing truth—one that will shake his faith in his countrymen, the law, and himself.

I thoroughly enjoyed this story! I found it entertaining and captivating. Ms. Odden’s writing style sucked me in from the beginning! Her writing made me feel as if I were living in 1878 and witnessing these events in person. Ms. Odden’s descriptions put you standing right by the Thames or searching the streets for evidence alongside Detective Corravan. Dialogue between characters can sometimes throw off a story, but I thought the dialogue in Under a Veiled Moon helped the story progress and the characters develop.

Speaking of characters, there are a lot of characters in this story. Thankfully, Ms. Odden includes a character list at the beginning of the book. I needed to refer to it a few times. The character development in the story is well done. I felt like each character was unique, authentic, and lifelike. Infallible characters tend to come across as fake, and thankfully there were not any characters like this.

Detective Corravan comes across as intelligent, rough around the edges, thoughtful, and empathetic. Behind his rough outer shell, he hides a much softer side that is quite endearing. Ma and Elsie Doyle seem so friendly, loving, and emotionally tired. Colin Doyle seems like a good kid who has made some poor choices. He doesn’t want to admit his mistakes. Belinda seems like the perfect match for Corravan. I love her insights into the case.

This story can feel quite sad at times. Disasters and death will make you feel that way. However, I liked how the relationships between the characters, along with the individual growth of the characters, still gave me hope among the sadness. I liked how the story played out and how Detective Corravan was able to put the pieces together along the way. I would be a terrible detective, I decided. Haha! I’ll stick to teaching and leave the detective work to the officers and detectives.

Content Rating: PG-13+ (There isn’t any “intimacy” in this book except for kissing. There is profanity in this book along with quite a bit of violence. Many people die, some brutally.)

1 thought on “Under a Veiled Moon by Karen Odden”