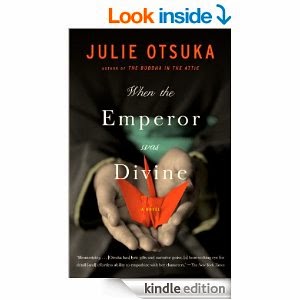 When the Emperor Was Divine by Julie Otsuka
Blurb:
“On a sunny day in Berkeley, California, in 1942, a woman sees a sign in a post office window, returns to her house, and matter-of-factly begins to pack her family’s possessions. Like thousands

of other Japanese Americans they have been reclassified, virtually overnight, as enemy aliens and are about to be uprooted from their home and sent to a dusty internment camp in the Utah desert. In this lean and devastatingly evocative first novel, Julie Otsuka tells their story from five flawlessly realized points of view and conveys the exact emotional texture of their experience: the thin-walled barracks and barbed-wire fences, the omnipresent fear and loneliness, the unheralded feats of heroism. When the Emperor Was Divine is a work of enormous power that makes a shameful episode of our history as immediate as today’s headlines.”

I have read many books on World War II. Some of them fiction, some of them nonfiction. I’ve read Unbroken, The Hiding Place, A Woman’s Place, and The Monuments Men just to name a few. Most of these books focus on either hiding the Jews, the men who fought in the war, or the women they left behind. This is the first book I have read coming from the perspective of a Japanese American in the United States during World War II. It is definitely a hard period of our history to think about or discuss. I think we all want to pretend that it never happened. Unfortunately, it did happen. So the next best thing would be to learn about it and prevent it from happening again. Just the fact that it is from that perspective makes it worth reading. It was interesting to learn about. I guess I’ve never thought too much about it. Unfortunately, it wasn’t my favorite style of writing. The characters are called “the woman,” “the girl,” and “the boy.” I guess I can see where she was coming from when she wrote it like that. My guess is that these people pretty much had their identities stripped from them, and not using names kind of shows that. They aren’t real people, they’re just women and children and men. There aren’t real faces to go with them. I understand that, but I felt like I never had a relationship with them. I didn’t get to know them. Really know them. I hate to admit it, but it was almost as if I didn’t care what happened to them because they didn’t mean anything to me. Once again, that might have been what the author intended, but I didn’t like it. I almost felt disassociated from the book. I was observing it, but I wasn’t too involved. Even without names the characters were somewhat developed. You learned a little bit about them as the story went on. I felt bad for them and was embarrassed that they had to be there at all, but it just wasn’t a story that I got sucked into. It was okay. I am glad I read it and was able to learn a little bit more about that difficult period in time.

Rating: PG-13 (There’s no profanity that I can remember, and no “intimacy.” There is some minor violence. A dog is killed brutally. There are some harsh things that happen in the internment camp.)

Recommendation: 14 -15 and up. This one’s tricky. I go back and forth on whether I’d want my 13 year-old reading this book. I think he could, and he would understand it, but it’s just a really heavy topic. The dog scene was difficult for me to read, and so I think I’ll have him wait a year or so, just until he matures a little more.