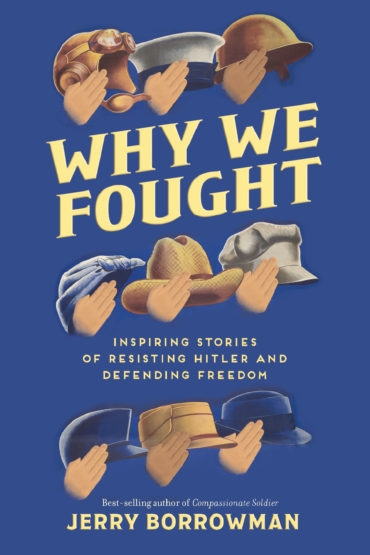 Book Review of Why We Fought by Jerry Borrowman

Wow! I’ve read many WWII books (long-time readers may know it is one of my favorite topics to read about) in my life. I have read books from the point of view of the everyday citizen, the soldiers, the people in concentration camps, prisoners of war, etc. At this point I thought I had read every point of view. Nope! Why We Fought by Jerry Borrowman tells the stories of different kinds of heroes in WWII. We learn of spies, saboteurs, ghost armies, and others who silently fought against the Nazis in the best ways they knew how.

Some were ordinary citizens like William Sebold, a German immigrant and US citizen, who could have been a deadly foe, but ultimately chose the Allied cause. Coerced by the Gestapo into becoming a spy in America, he instead approached the FBI, offering to become a double agent.

Among them was famous Hollywood star Marlene Dietrich, who was born in Germany but volunteered to entertain Allied troops in the European Theater of Operations and recorded radio messages designed to demoralize German soldiers.

As the Nazis swept through Europe, citizens around the world faced both an individual and a national complex moral question: How do you respond to tyranny and bloodthirsty madness? These are stories of men and women who would not surrender or compromise. They resisted and fought with total commitment for freedom and democracy.

I thoroughly enjoyed reading this book! Learning about all the different ways that people helped in the war against the Nazis gave me hope in humanity. The first story tells of Virginia Hall. Virginia is one of my new heroes! She may not have fought on the front lines, but she sure did sabotage them! She derailed trains, blew up bridges, took out roads, and managed hundreds of people to do the same. Virginia did all of this while speaking six languages and limping on a prosthetic leg. She named her prosthetic leg Cuthbert and didn’t let Cuthbert slow her down in any way, even when she had to hike or walk long distances. Her story is truly inspiring!

William Seabold, another saboteur, is the next story told. Seabold was born in Germany in 1899. He later moved to America and became an American citizen. He and his wife eventually moved to California where he worked in aircraft factories. That experience led him to become double agent. Being a double agent allowed him to thwart many of the Nazi plans

Marlene Dietrich, who was a Hollywood actor, comes next in the book. Marlene started off as an actress in Germany. She later moved to America and became a naturalized citizen. Marlene sold war bonds and joined the USO. As the war progressed, Marlene worked with the OSS (precursor the CIA) to produce a propaganda radio program against the Nazis.

These are only three of the stories documented in Why We Fought, and each story told is so inspiring. I loved learning about each of the people or groups and how they played a part in fighting the Nazis. The book is well written, interesting, engaging, and important for us to read and remember. It’s important that we remember people and groups like these and celebrate their courage and victories.

I believe this book would be a great addition to any home or YA classroom. It would work great as a silent read, read-aloud, or book study. I highly recommend this book!

Content Rating: PG-13 (This book does discuss war and things that happen during war. It is written is a way that is not too graphic.)