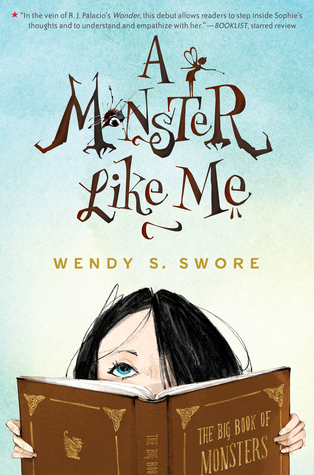 Book Review of A Monster Like Me by Wendy S. Swore

Have you ever thought of yourself as something unlovable or scary? It starts as a small idea and then festers into something uncontrollable and real. I think everyone has short moments where they may think that of themselves. Sophie thinks this of herself constantly. She’s convinced she’s a monster, which breaks my heart. No one should think that, especially a child. She got the idea from her favorite book—The Big Book of Monsters that she always keeps with her. Yes, it’s big and heavy, but that doesn’t stop her from carrying it everywhere. It’s how she determines which monsters or creatures are living around her—so she can protect herself. Find out more in my book review of A Monster Like Me by Wendy S. Swore.

“Being the new kid at school is hard, but Sophie has a secret weapon: her vivid imagination and her oversized, trusted Big Book of Monsters—an encyclopedia of myths and legends from all over the world. The pictures and descriptions of the creatures in her book help her know which kids to watch out for—clearly the bullies are trolls and goblins—as well as how to avoid them. Though not everyone is hiding a monster inside; the nice next-door neighbor is probably a good witch, and Sophie’s new best friend is obviously a good fairy.

Sophie is convinced she is a monster because of the ‘monster mark’ on her face. At least that’s what she calls it. The doctors call it a blood tumor, and it covers almost half of her face. Sophie can feel it pulsing with every beat of her heart. And if she’s a monster on the outside, then she must be a monster on the inside, too. She knows that it’s only a matter of time before the other kids, the doctors, and even her mom figure it out.

The Big Book of Monsters gives Sophie the idea that there might be a cure for her monster mark, but in order to make the magic work, she’ll need to create a special necklace made from ordinary items—a feather, a shell, and a crystal—that Sophie believes are talismans. Once she’s collected all the needed ingredients, she’ll only have one chance to make a very special wish. If Sophie can’t break the curse and become human again, her mom is probably going to leave—just like her Dad did. Because who would want to live with a real monster?”

As a mom and a teacher, it breaks my heart to think of this darling girl thinking something so terrible of herself. She has a blood tumor on her face, and it’s big. You can see why she’d think of herself as an ugly monster. The problem is, she can’t figure out which kind. She’s read her book dozens of times, and she can figure out what everyone else is, but she can’t find a description that matches her monster-type. She must be one, though, because she’s ugly, and it would explain why her dad left her. Once again, it makes me so sad that she thinks of herself in this way.

This book is so well written. Sophie’s voice in the story is sweet, real, and protective of her secret. Her thought process is realistic and child-like, and it draws you into the story. The descriptions of the monsters are witty and clever. I love how quick Sophie’s mind worked to match a person to a monster. It works because we all tend to judge people by their appearance and actions (whether or not those judgments are accurate is a different story), Sophie just goes a step further and puts a monster description with it.

The character development in this book is fantastic. You feel like you know each of the characters personally, and they come to life on the page. Sophie is well developed, likable, imaginative, and spunky. Sometimes I cringe with her because she has a bit of temper sometimes. Autumn is so sweet and fun. Just like a fairy. Mrs. Barrett reminds me of my grandma and Sophie’s mom is realistic, has her flaws, and has her strengths. I think she’s really good for Sophie. I do feel bad that Sophie feels like she can’t tell her mom everything she’s feeling.

This is such a clever story. The way Sophie’s imagination puts everything together is so imaginative and unique. It’s like living in a whole imaginary world. Having four kids myself, I can see that she’s using it as a coping mechanism to help her deal with her reality. And, she’s using it as a way to hide. It’s a good lesson to learn, though. There are quite a few great lessons and values in this book: friendship, the importance of relationships, learning that everyone has trials to overcome, not being judgmental, and the importance of talking about your problems.

A Monster Like Me reminds me of Wonder. It’s important for children and adults to read stories like these because it tends to put things in perspective. Learning lessons from a book Is a lot easier and less painful than learning them in real life. I loved this book and think the middle-graders and YA will also love it! If you liked Wonder or Mustaches for Maddie then you will enjoy this book. I highly recommend A Monster Like Me by Wendy S. Swore. This book would also make a great read-aloud.

Sophie’s story is dear to my heart because I know how it feels to be bullied because I looked different from everyone else. When I was a child, I had a hemangioma on my forehead that stuck out so far my bangs couldn’t cover it, no matter how hard my mother tried. Because the tumor was made up of blood vessels, I could feel my heart beating inside it when I was playing hard or really upset.

The incident at the grocery store where the hydra lady says, “Hey, look kids! That girl doesn’t need a Halloween costume. She’s already got one!” is an exact quote of what a woman once said to my mother and me. Another woman told a classroom full of kids that I had the mark of the devil. Kids asked if it was a goose bump, or hamburger, or if my brains had leaked out. My dad had to chase away some bullies who had followed me home, called me names, and pushed me into the street. Sometimes, after a bad day of bullying, I wished I could just rip the mark off my face and be like everyone else—but it was a part of me, and wishing didn’t change that.

My parents decided to take an active role in educating the people around me so they would know what a hemangioma was and understand that it wasn’t icky, or gross, or contagious. Whenever we moved to a new place, my dad would go with me to the elementary school and talk to the kids about my mark and let them ask questions. After those talks, kids befriended me and noticed when bullies came around. Like Autumn, my school friends would speak up when they saw someone being mean to me, and sometimes they would stand between me and the bullies until they left me alone. I didn’t let the bullies stop me from doing what I wanted to do. I climbed trees, went swimming, wrote poetry, brought my tarantula and snakes to show-and-tell, and played in the tide pools.

This is my message to anyone who experiences bullying: Don’t let the bullies define you! I’ve been there, I know it hurts to be teased, but don’t let it stop you from doing what you want. Find something you enjoy—a hobby, talent, or challenge—and practice that skill. Know that someone out there, maybe even someone in your same school, needs a friend as much as you do. Be that friend. Stand up for each other. And know that you are not alone.

You can always find me at WendySwore.com, and I would love to hear your stories and what you thought of the book.

Content Rating: PG (It’s clean! There’s no profanity or “intimacy.” There is some bullying and there are a few blown tempers with unkind words.)

Disclosure: I did receive a free copy of this book in exchange for an honest review.